Nyah (Patricia Laffan) is the villainess from the 1954 UK science fiction film "Devil Girl from Mars".

Nyah was a female alien cammander from Mars, dressed in shiny black vinyl.  She heads to London in her flying saucer.

Nyah is a part of the advanced alien team that is looking for Earth men to replace the dying male population on her world.  Because of damage to her saucer, caused by entering Earth's atmosphere and then colliding with an aircraft, she is forced to land her damaged flying saucer in the remote Scottish moors, near a local village.  She is armed with a raygun that can paralyze or kill, and she also has a tall menacing robot named Chani.

On Nyah's world, the emancipation of the women eventually led to open warfare between the sexes. The females won, usurping the political power of the men. This eventually lead to the sexual impotence of the planet's entire male population; a rapid decline in the birthrate soon followed.

The Martians possess an organic, self-regenerating technology, which was used to construct Nyah's spacecraft. Against this technology, human weaponry proves ineffectual, as demonstrated when Nyah comes away unscathed by gunshots from a pistol. The alien technology is unreliable, however, and Nyah's people have not been able to use it to artificially produce new offspring.

Much of the film unfolds in the bar of The Bonnie Prince Charlie, a Scottish country inn somewhere in Inverness-shire. N'yah occasionally enters, makes threats, then leaves so the residents can contemplate her words. It becomes clear that the local Scotsmen are not the least bit interested in going with her to Mars, and the local women are not about to give them up without a fight.

A pair of Earthly romantic sub-plots play out at the country inn: A fashion model, Miss Ellen Prestwick (Hazel Court), fled to The Bonnie Prince Charlie in order to escape a married man with whom she had an affair. She quickly forms a connection with Michael Carter (Hugh McDermott), a newspaper reporter. Meanwhile, a convict, Robert Justin, alias Albert Simpson (Peter Reynolds), who accidentally killed his wife, has managed to escape from a prison in Stirlingshire and has come to the inn, hoping to meet with the barmaid, Doris (Adrienne Corri), whom he truly loves.

Nyah finally responds with a little show of force. First, she entices Professor Hennessy aboard her spaceship to view the technological marvels of Martian civilization, and with her raygun, she incinerates the Jamiesons’ hunchbacked handyman due to his physical deficiencies. She then adopts the two-pronged strategy of also kidnapping their young nephew, Tommy, and then turning her robot loose to vaporize much of the manor’s grounds.

Realizing that the only road to victory over Nyah means employing guile and treachery, Hennessy suggests that one of the men at the inn volunteer to go to Mars in exchange for the safe return of Tommy. This selfless volunteer, after a bit of coaching from Hennessy, will then fatally sabotage the Devil Girl’s spacecraft after takeoff. Hennessy at first volunteers, but Carter convinces him that he is much too old to appeal to Nyah and has no chance of being accepted. Carter means to go instead, but at the last minute, Justin outmaneuvers him, thereby atoning for the inadvertent slaying of his wife. After take-off, he successfully sabotages Nyah's flying saucer, sacrificing himself to save Earthmen from the Devil Girl from Mars. 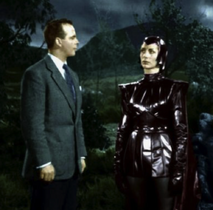 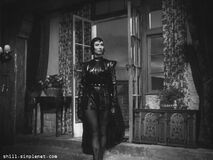 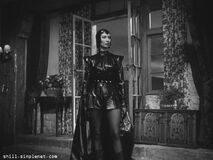 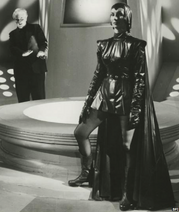 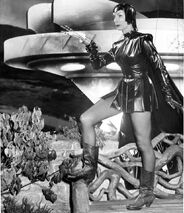 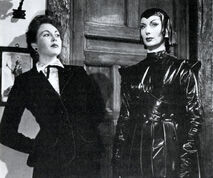 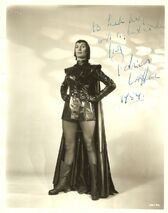 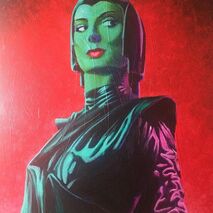 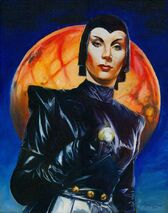 Add a photo to this gallery
Retrieved from "https://femalevillains.fandom.com/wiki/Nyah_(Devil_Girl_From_Mars)?oldid=176133"
Community content is available under CC-BY-SA unless otherwise noted.