Start a Wiki
watch 01:51
The Loop (TV)
Do you like this video?
Nurse in Morgue (Arlene Martel) is the antagonist in the 1961 episode "Twenty Two" for the TV series "The Twilight Zone".  At the time, Arlene Martel, was billed as Arline Sax.

A professional dancer Liz Powell (Barbara Nichols) is recovering in a hospital from an acute anxiety brought on by work and fatigue.  Every night she has a nightmare in which she is awakened in her hospital room by a loud ticking of a clock.  She knocks a glass of water to the floor, shattering it, and then follows the sound of footsteps into the hall.  She sees a nurse, descend to the basement in the elevator.  Liz follows the nurse down and ends up at the hospital morgue, which is labled room twenty-two.  When she arrives, a harsh looking nurse bursts through the door and says "Room for one more, honey".  This is where the dream ends, and she wakes up screaming.

That night, she tries to visualize a pack of cigarettes next to the glass of water on the nightstand.  However, this only changes a small portion of the dream, and everything else remains the same. She once again wakes up screaming after seeing the nurse at the morgue.

The next morning, Liz is hysterical, and a nurse is required to hold her down while the doctor injects a sedative.  The doctor is still convinced that her dream is a product of her exhaustion, but makes the comment that it is strange that Liz knows that the room number of the morgue is room 22.

When Liz is discharged from the hospital, she arrives at the airport for a flight of her next booking in Miami.  After buying her ticket, she learns that the flight number is 22.  Liz begins to experience sensory details from the dream, and is distracted by the loud ticking of a wall clock that only she can hear.  She bumps into a woman carrying a vase, and the vase drops to the floor and shatters.  Footsteps in the hall seem magnified to her.  While walking up the stairway to board her plane, the same nurse who was in her nightmare appears at the entrance, now dressed as a stewardess.  She says, "Room for one more, honey".  Liz is terrified, and runs down the stairs to avoid the flight.  Airport staff try to calm her.

The plane taxis down the runway and takes off, and after taking off explodes in midair.  Liz had a premonition to avoid the flight, and the warning came in the form of the ghost of the nurse/stewardess.  The ending narrative is "Miss Elizabeth Powell, professional dancer.  Hospital diagnosis: acute anxiety brought on by overwork and fatigue.  Prognosis: with rest and care, she'll probably recover.  But the cure to some nightmares is not to be found in known medical journals.  You look for it under potions for bad dreams - to be found in the Twilight Zone". 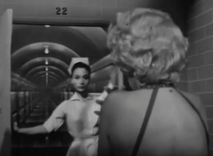 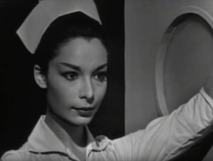 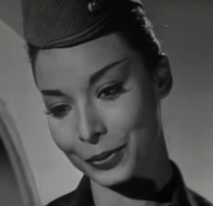 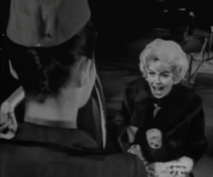 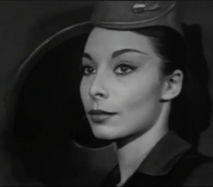 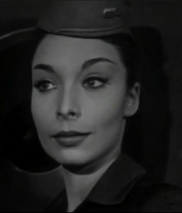 Add a photo to this gallery
Retrieved from "https://femalevillains.fandom.com/wiki/Nurse_in_Morgue_(The_Twilight_Zone)?oldid=190205"
Community content is available under CC-BY-SA unless otherwise noted.