Start a Wiki
watch 01:51
The Loop (TV)
Do you like this video?
Karla Foreman, credited as simply Nurse Foreman (Lara Gilchrist), was the main villainess from Supernatural episode 5.11:  "Sam, Interrupted" (airdate January 21, 2010). She was a nurse at a mental hospital where Sam and Dean intentionally get themselves committed to in order to investigate a series of murders at the facility. After learning that the victims' brains were sucked out, Sam, Dean, and fellow hunter Martin Creaser figure out that the murders were committed by a wraith, a creature that feasts on brains.

Nurse Foreman is revealed as the wraith when Dean and Martin witness her feeding on a female patient, doing so through a retractive spike that slides through her right hand. After fighting Dean and Martin, she sets her villainous sights on Sam, while relishing feasting on his brain because of the mental damage inside. All the while, the villainous nurse also revealed that she caused the brothers' hallucinations with one touch, with Dean's illusion coming in the form of Dr. Erica Cartwright, an evil psychiatrist.

Dean catches Nurse Foreman in the nick of time and fights with her, but she unleashes her spike to use on Dean. At that moment, however, Dean breaks the spike, causing Nurse Foreman to scream in pain. She charges at Dean, only for Dean to kill the villainess with a silver scalpel. 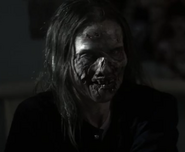 Nurse Foreman in agony after Dean snaps her spike

Nurse Foreman killed by Dean
Add a photo to this gallery
Retrieved from "https://femalevillains.fandom.com/wiki/Nurse_Foreman_(Supernatural)?oldid=169142"
Community content is available under CC-BY-SA unless otherwise noted.