Nurla is a villainess from Zoot Comics #7 from 1947. She is the first of many evil women to appear in the Rulah, Jungle Goddess series of stories/comics.

She commands one tribe and has them trick another tribe into handing over pearls to her by claiming to being a moon goddess, the pearls are guarded by deadly snakes in the tomb of their dead Chief. She lies to the tribe and tells them that the snakes will not poison those under her command, fully knowing that the snakes will likely kill any of the tribesmen that enter, and not caring.

She buries the pearls in the jungle and is then confronted by the debuting heroine Rulah, she orders her tribe to kill Rulah and then flees into the jungle, never seen again. Rulah refuses to go after and seems confident that "the jungle will avenge her crime". 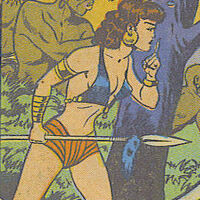 With some of her tribe 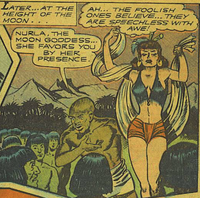 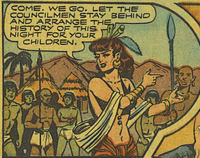 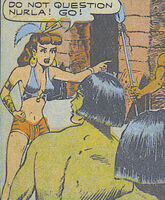 Commanding the tribe to get the pearls 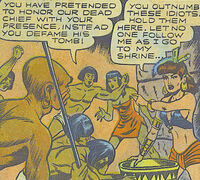 With the pearls, telling her tribe to attack the tribe she has stolen from

The villainess has the pearls 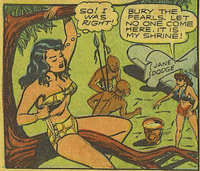 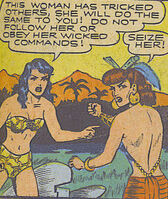 Ordering her tribe to seize Rulah 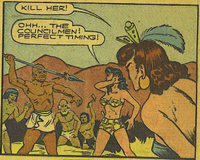 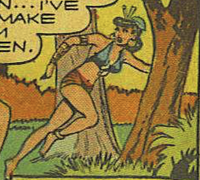 The evil Nulra flees into the jungle
Add a photo to this gallery
Retrieved from "https://femalevillains.fandom.com/wiki/Nurla_(Rulah,_Jungle_Goddess)?oldid=175466"
Community content is available under CC-BY-SA unless otherwise noted.