Start a Wiki
watch 04:10
The Loop (TV)
Do you like this video?
Norma Desmond (Gloria Swanson) is a protagonist villain in the 1950 film noir Sunset Blvd (sometimes known as Sunset Boulevard)

Norma Desmond used to be a famous actress during the days of the silent movies, but all that changed when the talkies began. Norma now lives in depression with her ex-husband turned butler Max. Norma believes that she is going to revive her career because her fans have been writing her letters. However it is Max who is writing her letters because he doesn't  want her to know that  her fans have forgotten her.

When Norma meets Joe Gillis a writer who is trying to hide from the IRS. She hires him to help her write the script she is working  on for  a new silent movie in which she  hopes will revive her career. She sends the script to The Paramount Movie Studios and waits for Cecil B. Demille to respond. Paramount studios calls her and she is excited and believes that this is her chance for a come back. However it is not Norma they interested in, but rather her old car.

Norma falls in love with Joe, but he doesn’t love her back. The pitiful, delusional villainess then shoots him, killing him. Norma then goes even more insane than she already was, when the police arrive she believes that they are here to film her movie. 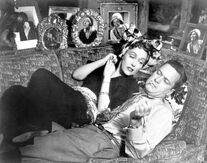 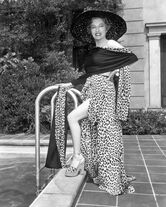 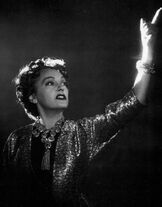 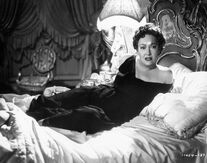 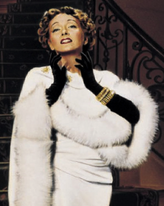 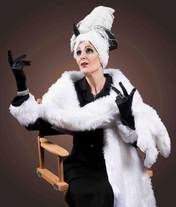 Add a photo to this gallery
Retrieved from "https://femalevillains.fandom.com/wiki/Norma_Desmond_(Sunset_BLVD)?oldid=209379"
Community content is available under CC-BY-SA unless otherwise noted.