Nita is a villainess in the 1948 episode "The Carnivorous Blonde" #20 for the comic book, Rulah, Jungle Goddess.

Nita is the attractive wife of wealthy George Mosby.  The two of them are on a big game hunt in the jungle.  Nita nearly shoots her husband while hunting wild boars.  It is soon learned that she did not intend to hit the boar, but her own husband, and she is having an affair with Guido, the guide.  Not only that, but the two are planning to knock off her husband and marry each other.

George Mosby's gun jams, and Rulah is able to distract the elephant from trampling him.  Nita attempts to shoot Rulah, but her shot goes wild, and claims she was trying to shoot the elephant.  As a result, she is invited back to the camp to spend the night.

The guide makes a pass at Rulah later that night, and she puts him in his place.  Rulah confronts Guido on his intentions along with Nita.

Rulah then goes into the tent of Mr. Mosby and tells him of her suspicions about his wife.  He is at first skeptical.  However, he agrees to allow Rulah to expose her the following day.

The next day, Rulah makes Nita jealous after she flirts with her boyfriend.  Guido tells Rulah, they should devise a plan to get rid of Mrs. Mosby, saying she is "TNT wrapped up in blonde ice".

Mr. Mosby sees through his wife, and confronts her.  Nita tells him "I've been through with you for years, and if it hadn't been for your money...."  She raises her rifle and is about to shoot him.

However, a gorilla suddenly comes into camp and grabs Rulah.  Nita takes the time to shoot Guido in the back.  She then turns the gun on Rulah, who is still in the clutches of the gorilla.  Another gorilla grabs George and begins crushing him.  Rulah disposes of the first gorilla that attacked her, and throws her dagger at the one crushing George.  Rulah then turns her attention on Nita who still has her rifle in hand.  The two engage in a catfight, until Nita is able to break free.  However, Nita runs near the gorilla on the ground, who grabs her leg.  Once the gorilla has her, he takes a bite out of Nita's neck killing her.

Later Rulah bids farewell to the widower Mosby, and he tanks her for showing him what he was too blind to see. 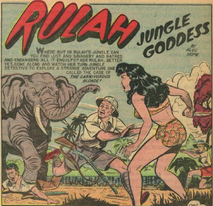 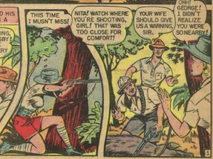 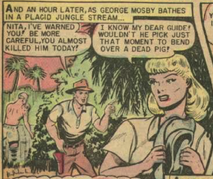 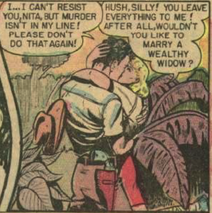 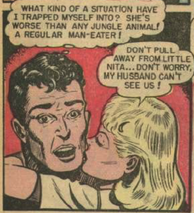 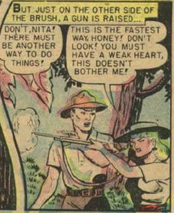 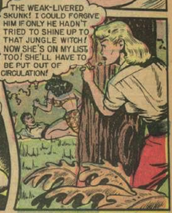 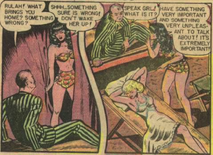 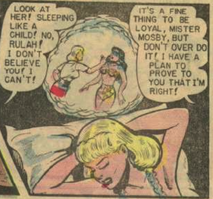 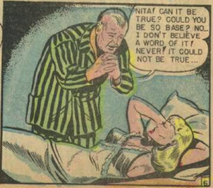 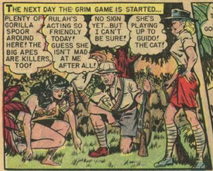 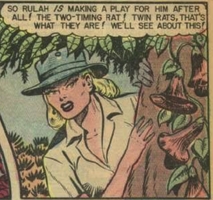 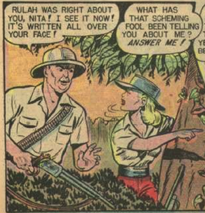 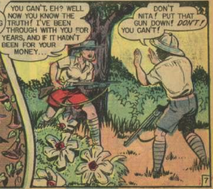 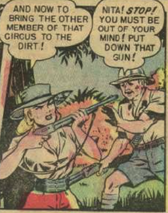 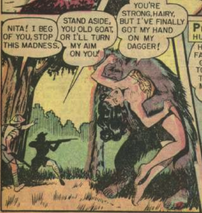 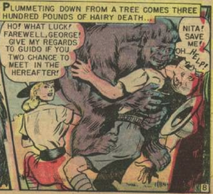 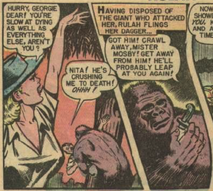 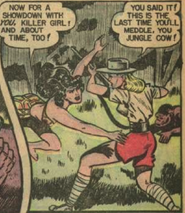 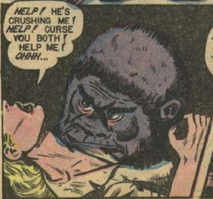 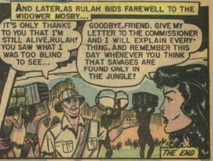 Add a photo to this gallery
Retrieved from "https://femalevillains.fandom.com/wiki/Nita_Mosby_(Rulah,_Jungle_Goddess)?oldid=155573"
Community content is available under CC-BY-SA unless otherwise noted.