Nina is a gangster villainess in a Wonder Woman comic book story.

Racketeer gambler King Diamond and his partner in crime Nina tell Nancy Loomis, the wife of boxer Wild Bill Loomis, that her husband will be badly injured by their thugs if she doesn't agree to slip him disabling pills which will make sure his opponent, Rocky Jenks, wins a big title fight. Diamond has bet a large amount of money on Jenks. Wild Bill (who jealously thinks Nancy is "carrying on" with King) suddenly busts into Diamond's office, knocks down Wrecker, a boxer who is also Diamond's henchman, and hauls Nancy out of the room.

Looking down at the knocked out Wrecker, Nina concocts an evil plan - to kill Wrecker and shop Wild Bill to the police as the slayer, so Loomis will be unable to fight in the match at all. The police arrive at the Loomis home just as Bill, after listening to a report on the radio of Wrecker's dead body being discovered, is telling Nancy he didn't hit the thug hard enough to kill him. Bill is taken into custody.

Holliday girl Etta Candy, a friend of Nancy Loomis, makes a call to Wonder Woman on Pardise Island asking for help. Meanwhile, Wild Bill breaks jail in order to find Diamond, wanting him to tell the police that he'd struck Wrecker in self defence. Wonder Woman arrives at Diamond's mansion, where she overhears King and Nina laughing about the way they'd framed Loomis. Wonder Woman ropes Diamond with her magic lasso, which forces him to tell the truth, that Nina "made" him kill Wrecker to set up Wild Bill for the crime and get him out of the fight. Loomis himself arrives at that moment to hear Diamond's confession. However, Nina grabs a gun from a desk drawer and knocks out Wonder Woman from behind with it. She holds up Wild Bill and frees Diamond from the lasso. The crooks bind Wonder Woman up with her own lasso. Tied up and out cold, Loomis and Wonder Woman are taken to Holliday college where the villains put them in Prof Alto's experimental balloon/sphere. Nina puts acid on the cables, so that eventually they'll break, freeing the balloons, sending Loomis and Wonder Woman within the sphere plunging to their deaths. But Loomis and Wonder Woman manage to free themselves from their bindings and the heroine summons her invisible plane. The pair escape the death trap. In the plane, Wonder Woman gets a message from Etta Candy, telling her she and Nancy are being held prisoner at Diamond's mansion. Wonder Woman heads the plane to the boxing venue, just before the match is about to be given the other fighter because Wild Bill hasn't shown up. After dropping Loomis in the ring she heads the plane for Diamond's place.

At Diamond's mansion, Etta and Nancy are tied to chairs, Nina smugly says they will later be got rid of. Turning on the TV, the villains are stunned to see the supposedly dead Wild Bill is in the boxing match. But the commentator alludes to Bill's poor performance -  the boxer having lost heart for the fight knowing his wife is in peril. At that moment, Wonder Woman and a detective burst into the room. Nina pulls a gun and points it at Etta, saying she'll shoot her unless they're allowed to leave. Though still tied, Etta hurls herself out of the chair, disarming and knocking over the villainess. At the boxing venue, It looks like Bill is about to be counted out, but Nancy and Etta arrive at the scene with Wonder Woman, which puts new strength into Loomis who soon knocks out his opponent.

Female gangster Nina is the kind of villainess who is rare in these Wonder Woman comics. Utterly cold blooded and ruthless, she seems to be the dominant villain rather than King Diamond. She's the one who comes up with the murder ideas and methods, and she calls King a "fool" and a "blabbermouth." Forced to be completely truthful while under the power of  Wonder Woman's magic lasso, Diamond specifically says Nina "made" him kill Wrecker.

Caucasian blonde in a tight red dress, possibly aged around her late 20s. Good looking, but her face can look cruel. 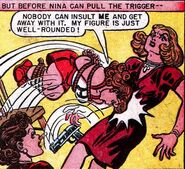 Nina 4
Add a photo to this gallery
Retrieved from "https://femalevillains.fandom.com/wiki/Nina_(Wonder_Woman)?oldid=203164"
Community content is available under CC-BY-SA unless otherwise noted.