“Stop complaining and just learn to like it. Just be thankful he didn't ask you to stick it up your ass. The sooner you stop pretending to be a prude the sooner you'll get used to the life of being the slut you really are. That's how I handled it.”
―Nina offering advice to Kate.

Nina makes her debut in the Fansadox comic 290 Total Control. A loyal sex slave of Eli Weiss, Nina is the one who has Kate kidnapped at the start of the story.

Nina's past is largely left ambiguous for the most part, according to both Eli and herself, her personality was originally very similar to Kate's.

Nina got a job as Eli Weiss's personal secretary at his multi-billionaire business. It wasn't long before Eli was able to find dirt on Nina to blackmail her into doing anything and everything that he wanted no matter how depraved. Though she fought against it at first, eventually Nina grew to enjoy her new lifestyle and became eager to serve him in any way.

According to Nina, Eli takes great pleasure in seeing her humiliated as he has allowed had her accept assfucks from V.I.P.'s and made her lick the asses of ugly rock stars in the past. Though she believes that she is starting to get on his good side.

Nina first appears at the restaurant that Kate, Eli, and Michael go to. When Kate goes into the bathroom Nina follows her and the two discuss lipstick with Nina referring to her by name.. As Nina is leaving the bathroom she leaves a message behind for Kate with the instructions to get into contact with her later leaving Kate confused as she had not told Nina her name.

The next day, as Kate is heading to work, she is ambushed in the parking garage by Nina and two goons who drag her into an unmarked van and off to an undisclosed location. One of the thugs named Hugo wants to rape Kate but Nina warns him not to as she belonged to the Master now. Hugo then suggests that Nina fuck him, but Nina is disgusted by the idea, viewing him as being too ugly to fuck. Nina reveals that the message had been a list of instructions from her Master who had been expecting Kate.

Once at the location, Kate is shocked to see that the one who had her kidnapped was Michael's older brother Eli Weiss who was currently busy raping Megan Fox on behalf of Michael Bay.

After this, as Eli is molesting Kate, Nina starts insulting her and trying to dominate her, but Eli (who has apparently warned against such things in the past) slaps her causing the humbled Nina to apologize. As a punishment, Eli allows Hugo to have his way with her. Nina struggles furiously but is eventually restrained and gagged by Hugo who proceeds to sexually violate her.

Later, Eli along with Nina break into Kate's apartment at three in the morning and assault her while she's asleep with Nina being forced to lick Eli's asshole while he fucks Kate.

The next day, as Kate is coming into work, she is confronted by Nina who has been ordered by Eli to act as Kate's secretary in order to keep an eye on her and make sure that Kate obeys his orders. Nina then reveals that Eli has customized Kate's entire office including her chair to possess sex toys in which to torment her further. 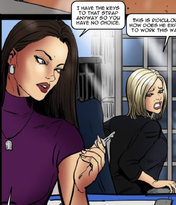 Add a photo to this gallery
Retrieved from "https://femalevillains.fandom.com/wiki/Nina_(Total_Control)?oldid=206165"
Community content is available under CC-BY-SA unless otherwise noted.