The Female Villains Wiki
Register
Don't have an account?
Sign In
in: 2010s, A Taste Of Her Own Medicine, Animal Murderer,
and 20 more 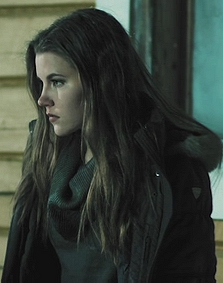 Nina (Veera W. Vilo) is a minor antagonist in the 2015 horror-comedy film "Bunny the Killer Thing". She is an enigmatic, shady, cold, impassive, brooding, and maladjusted pervert who is in love with Sara.

A supposed "friend" of characters Emma and Sara, Nina decides to go with them to a cabin where they intend to spend the weekend with some guys. Nina becomes jealous once she sees Sara flirting with a guy named Vincent; so much so that she murders an innocent squirrel outside to vent her frustration. A little later, when Sara is passed out drunk in bed, Nina proceeds to rape her. After realizing that the act was seen by another boy who was hiding in the closet, the rapist offers to kiss him and let him feel her breasts so that he will "forget" what he saw.

Later the titular killer man-rabbit bursts into the cabin. In order to save herself, Nina cowardly pushes Vincent into the arms of the monster. She then finds Sara and insists that they hide underneath a boat. However, once there, Nina bashes Sara's head against the wood, slaps her, and then proceeds to rape her once more. The traumatic experience does not last long, though, as Bunny drags Nina out from the boat, breaks her neck, and then rapes her corpse.

Nina from promotional artwork for the film.
Community content is available under CC-BY-SA unless otherwise noted.