Start a Wiki
watch 01:48
The Loop (TV)
Do you like this video?
Nicole Cashper aka Stacy (Amy Sloan) is the hidden villainess of the 2003 film Wicked Minds. She was a friend of Lana Price, the new wife of wealthy businessman Mason Price. She first appeared at a party Lana and Mason were attending with Mason's son Holden, with Lana attempting to set the two up after learning that Holden had had his heart broken by his college girlfriend Stacy.

Over the course of the movie, however, Holden and Lana developed an attraction to one another as Mason became possessive and abusive towards Lana, leading the two to begin an affair. After Mason was found stabbed to death, Holden and Lana were questioned, with the latter revealing that she had been meeting with Nicole at the time of Mason's death. Later on, though, she revealed the whole truth about the meeting to Holden: Nicole had found out about Lana and Holden's affair and videotaped them having sex, and was demanding $100,00 for her silence.

Nicole later arranged a meeting to give the tape to Lana in exchange for the money. But the meeting went bad when Holden arrived and tried to demand the tape from her, leading Nicole to drive away with Lana before sending a copy of the tape to Harry, the executor of Mason's estate. However, Nicole later made a statement to the police, claiming she and Lana were lovers and that they conspired together to blackmail Holden with the sex tape. She also claimed that Lana had killed Mason and had come to her for help destroying the evidence, and had confessed to her that she planned to kill Holden and stage his death as a suicide to pin the crime on him.

Later on, Nicole appeared at Holden's house after he found the bloodied sword used to stab Mason, wearing a dark cloak and holding him at gunpoint, proclaiming that she'd loved Lana and making it seem she was going to kill Holden in revenge for stealing her. But in a shocking twist, Nicole told Holden to "call her Stacy" when he said her full name before kissing him, leading to the truth being revealed about Mason's murder: he had been killed by Holden, who poisoned his fruit shake with a lethal dose of pesticide. He then later had his evil lover stab his father's body with the sword, setting it up to look like Lana was trying to make it appear someone stronger than her had killed Mason. Nicole also disguised herself as Lana and flew to Venezuela to make it appear that Lana had fled the country to avoid arrest. It also originally appeared that Nicole killed Lana by shoving her body off a cliff after Holden knocked her out.

But after Holden called the police to report "finding" the bloodied sword, Lana arrived armed with a gun, having survived the fall and returned to get revenge on Holden for betraying her, shooting him in the shoulder. Lana eventually cornered Holden at the cliff where Nicole threw her from, only to be shot to death by the police before she could. The movie then ended with Nicole and Holden driving away in his father's sports car, with Nicole waving goodbye to a homeless man who Holden gives a $100 bill to. 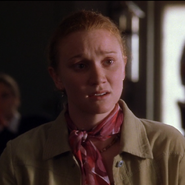 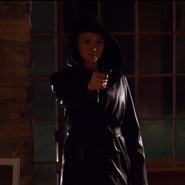 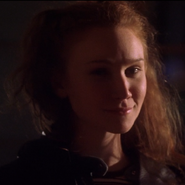 Nicole as she is revealed as Holden's lover and conspirator
Add a photo to this gallery
Retrieved from "https://femalevillains.fandom.com/wiki/Nicole_Cashper_(Wicked_Minds)?oldid=174840"
Community content is available under CC-BY-SA unless otherwise noted.