Ni-Chang (Li Bingbing) also known as the White-Haired Witch, is a cold, impassive, ruthless, bloodthirsty, and violent witch sent by the evil Jade Warlord to find and recover the Monkey King's mystical staff in exchange for the elixir of immortality. She confronts Jason Tripitikas, a young boy prophesied to return the staff to its rightful owner, in an attempt to take the staff from him. Jason and his followers, Lu Yan, the Silent Monk and Golden Sparrow, escape from Ni-Chang but she fires an arrow at Lu Yan which nearly kills him. Jason realities that only the elixir of immortality can save Lu Yan so he travels to the Warlord's palace alone to exchange it for the Monkey King's staff.

Ni-Chang invites Jason inside but claims the Warlord had promised to give the elixir to her, though Jason reminds the Warlord that he is the one who has brought the staff to him and therefore he should be given the elixir instead. The Warlord then arranges a fight to the death between Jason and Ni-Chang to decide who the elixir should be given to. Jason is easily outmatched and quickly beaten by Ni-Chang, but before the Warlord can kill him, the other protagonists arrive to fight off the Warlord and his minions. Jason manages to grab the elixir and throws it towards Lu Yan, who drinks it and is momentarily revived. Lu Yan then fights Ni-Chang on the palace balcony and knocks her over the edge, though her long hair prevents her from falling. However, before she can climb back up, Lu Yan cuts her hair with a knife and sends her plunging into the misty darkness below. 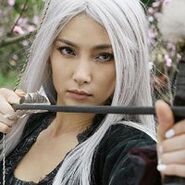 Add a photo to this gallery
Retrieved from "https://femalevillains.fandom.com/wiki/Ni-Chang_(The_Forbidden_Kingdom)?oldid=187404"
Community content is available under CC-BY-SA unless otherwise noted.