Neena Hagen (ネーナ・ハーゲン) is a villainess from the anime Agent AIKa (アイカ).

She is 28 years old and is the younger sister of the show's main villain Rudolf Hagen. She really loves her older brother, to a level beyond most sibling relationships. She is the second highest ranking person on the ship, and has authority over Delmo Corps.

She has pink hair and is very scantly clad, wearing just a bikini, long coat and a pair of high heels. She is very sadistic and enjoys physically disciplining her subordinates. She also has a jealous side, and immediately dislikes the show's protagonist Aika for seducing her big brother, and dislikes the attention Rudolf gives Aika.

Aika has a power that can enhance her abilities, Rudolf finds a way to create the same power for Neena, obtained through a pair of red panties created for her by her brother. This power physically changes her appearance and gives her tentacles to attack with. But during a fight with Aika, her powers run out of control and end up mutating her. In this form she ends up killing her brother, but still cradles him lovingly and carries his corpse out into space, she is not seen again. 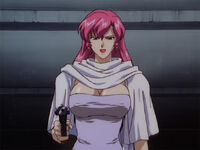 Pointing a pistol at Aika

Ordering the White Delmos to punish the Black Delmos for failure 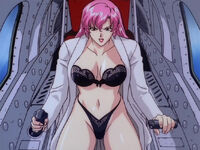 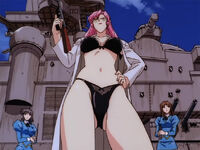 Standing over a fallen Aika 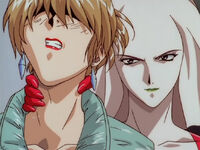 Choking Aika in her enhanced form 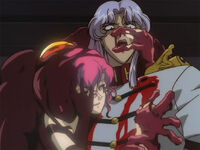 Cradling her brother as a mutated mess
Add a photo to this gallery
Retrieved from "https://femalevillains.fandom.com/wiki/Neena_Hagen_(Agent_AIKa)?oldid=193924"
Community content is available under CC-BY-SA unless otherwise noted.