Start a Wiki
watch 14:21
The Loop (TV)
Do you like this video?
Natasha Fatale is the main female antagonist on the animated TV series "The Adventures of Rocky and Bullwinkle and Friends", which ran from the mid fifties to the mid sixties. She was voiced by June Foray.

Natasha appears as a very slim woman, usually wearing a purple dress that goes from breasts to her knees.  She wears black or red lipstick, and black high heels.  Her black hair is brushed back while curly by her shoulders.  She has a Russian accent.

Natasha was the girlfriend and accomplice of the main antagonist Boris Badenov. Boris and Natasha live in Pottslyvania where everybody there is a spy.   Boris and Nasha are always defeated by Rocky and Bullwinke or as they call them "Moose and Squirrel". Boris and Nasha's superiors have been Mr. Big, a short man who uses a flashlight to make his shadow big so he will seem threatening and Fearless Leader. Boris and Nasha are also master of disguises.  She has a temper against Boris and Fearless Leader when their plans go astry.  Her anger increases when trying to eliminate Rock and Bullwinkle. According to Wikipedia: "According to the Rialto Theater's Moosebill for "Downhill: The Musical" (a special table of contents insert created for the DVD box set Rocky and Bullwinkle & Friends, The Third Season), Natasha is supposedly the only child of Axis Sally and Count Dracula. A former Miss Transylvania, she was expelled from college for subversive activities at a local cemetery. She traveled from Transylvania to the United States at the age of 19, landing in New York, where she spent two years posing for cartoonist Charles Addams, and as the party girl who pops out of the big cake at embalmers' stag parties.

Creator Bill Scott modeled Boris and Natasha after two of Addams' original characters from his cartoons, who were later named Gomez and Morticia Addams. She met Boris when they were arrested for throwing rocks at Girl Scouts of the USA|Girl Scouts.

One time she does not play a vaiilian is a short where she competes in a musical contest judged by Rocky Squirell. Natasha plays a balankia. Some of the funny dialogue: Borris Such a Malady! Rocky Do you mean Melady? Borris Not the way she plays it! An angry Natasha "Crowns" Borris with the instrument. It is then shown that Natasha won 1st Prize. Borris cant resist keeping his Big mouth shut. Borris: The LAst time she took something, the Judge gave her 90 days [in jail] Again an angry Natasha "Crowns" Borris ! 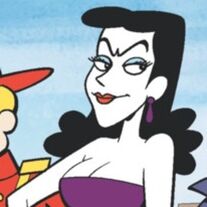 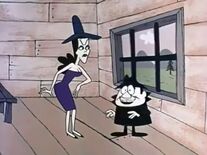 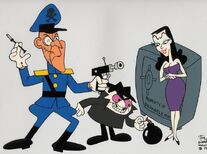 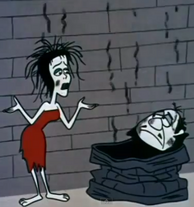 Add a photo to this gallery
Retrieved from "https://femalevillains.fandom.com/wiki/Natasha_Fatale_(The_Adventures_Of_Rocky_And_Bullwinkle_And_Friends)?oldid=206662"
Community content is available under CC-BY-SA unless otherwise noted.