Start a Wiki
watch 01:51
The Loop (TV)
Do you like this video?
Natalya (Barbara Nedeljakova) is a minion in the 2005 horror thriller film "Hostel". She is a cold, impassive, violent, bloodthirsty, and very intelligent, charismatic, and manipulative femme fatale whose job is to seduce ignorant male tourists with the prospect of sex, so that they can later be abducted and tortured to death by high-paying clients. Like all the other members of the Elite Hunting Club, she is cruel, chaotic, dangerous, remorseless, and very sadistic.

Natalya, along with her friend Svetlana, are the two women assigned to room with protagonists and fellow buddies Paxton, Josh and Oli at a hostel in a Slovac city. The trio of males start out having a fantastic time, but the fun is short lived once Oli turns up missing. Not long after, Josh is next, prompting a very concerned Paxton to find out just what happened to his friends.

Paxton confronts Natalya about it, who plays dumb at first, but then leads him to a large, seedy looking structure; explaining that Oli and Josh are attending an "art exhibit". It is here that we learn that this was all part of Natalya's plan. The woman bursts out in wicked laughter as a horrified Paxton discovers his best friend murdered and butchered. He apprehended and locked in a room to be tortured and killed himself by one of the clients.

Through luck and stealth, Paxton miraculously manages to escape the compound with another victim and steals a vehicle to get out into the city. Though his thoughts are focused only on getting themselves to safety, somewhere along the way, he is stunned to see Natayla, Svetlana and Alex, the man who first steered them towards the hostel, all conversing together on a street corner. In a rage, Paxton floors the vehicle and kills all three; running over Natalya a second time for good measure.

Welcoming the boys to their room...

She chooses Josh, while her friend is busy charming Paxton...

What's bothering you, Paxton? Aside from your friends mysteriously vanishing, of course...

Maybe they decided to stop here? 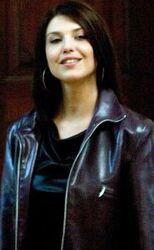 Add a photo to this gallery
Retrieved from "https://femalevillains.fandom.com/wiki/Natalya_(Hostel)?oldid=191090"
Community content is available under CC-BY-SA unless otherwise noted.