Start a Wiki
watch 01:48
The Loop (TV)
Do you like this video?
Natalya (Nora Dunn) is a villainess in the 1998 family comedy "Air Bud: Golden Receiver".

Natalya is a Russian animal poacher along with her brother and partner, Popov (Perry Anzilott).

They were first seen when Natalya was practicing a performance and gets interrupted by Popov who had just returned with a chimpanzee he had stolen.  They discovered Buddy on T.V. and decided to try to kidnap him in hopes of having him perform as a special attraction in a circus they planned to open in their native land.

They attempted to use an ice cream truck to capture Buddy and whenever children would ask for ice cream they would tell them to go away.  They were able to kidnap Buddy one night when his owner Josh Framm ran away from home.  Later, Buddy and the other animals managed to escape and Natalya and Popov were arrested and placed into the custody of the Russian Embassy after their ban fell into a lake following a chase sequence. 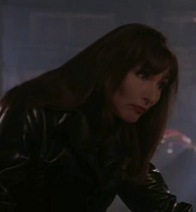 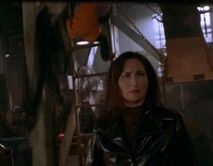 Add a photo to this gallery
Retrieved from "https://femalevillains.fandom.com/wiki/Natalya_(Air_Bud:_Golden_Receiver)?oldid=166511"
Community content is available under CC-BY-SA unless otherwise noted.