Start a Wiki
watch 01:48
The Loop (TV)
Do you like this video?
Natalie Hirst (Romina D'Ugo) is the villainess of "The Common Wealth", episode 4.06 of Republic of Doyle (airdate February 17, 2013). She was a notorious specialty art thief, with detective Jimmy O'Rourke spending ten years chasing after her, foiling three of her past heist attempts. Over that course of time, Natalie and Jimmy developed a long-distance rapport of sorts, with Natalie even sending Jimmy's mother flowers for her birthday.

The episode began with Jimmy attempting to arrest Natalie as she was at Newfoundland museum The Rooms, only for Jake Doyle to unintentionally intervene and allow Natalie to escape. Jake and Jimmy reluctantly agreed to work together to track Natalie, eventually finding messages near a parking space Natalie was renting that pointed to a catalogue for The Rooms with a page torn out, which made it appear Natalie was looking to steal The Rowe Collection, a rare and valuable collection of Newfoundland currency.

But in actuality, Natalie's robberies were a mask for her true nature as an assassin, with her robberies serving to distract the authorities from her kills. The episode's current events had Natalie being hired to kill High Commissioner Shane Garrett, working alongside fellow hired killer Angus Farris. Jimmy and Jake were able to apprehend Natalie when she returned to the museum, with Natalie later flirting with Jimmy in her interrogation while claiming that Angus had beaten her to stealing the currency. Natalie later talked with Jimmy alone, kissing him before giving him what she claimed was the location where they would find Angus and the stolen currency.

During the conversation, however, Natalie managed to snatch a pen from the table, which she later used to undo her handcuffs. Once she was freed, the evil Natalie threatened Constable Monica Hayward with the pen, stealing her gun and leaving her bound and gagged to a chair before leaving the station, having stolen Monica's clothes to escape undetected. As the investigators tried to deduce where Natalie would go, Des Courtney revealed (much to Jimmy's shock) that Natalie was using her robberies as a cover for a killing spree, finding out that a key figure died at around the same time as all of her crimes. Soon afterwards, Jake and Jimmy (along with fellow detective Wolf Redmond) found Shane at The Rooms, having been shot (non-fatally) by Natalie, leaving behind the currency collection and a note to Jimmy, telling him that this was their last encounter now that he knew she was a killer and that they would "always having Algeria".

The last part of the note led Jimmy to realize how Natalie was planning to escape, catching her as she prepared to take a sailboat to escape as she had after committing a heist in Algeria. After confessing to intentionally leaving Jimmy the incriminating clue, Natalie asked Jimmy to come with her. When Jimmy chastised Natalie for her status as a hired killer, Natalie claimed that that part of her life was over and that the reason she'd spared Shane's life was because of her client's petty reason for wanting Shane killed (he had screwed up on a kick-back deal). Ultimately, Jimmy rejected Natalie's offer before Jake arrived with the police, who promptly handcuffed and arrested Natalie. 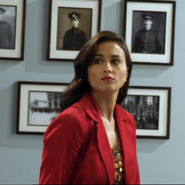 Natalie's arrest
Add a photo to this gallery
Retrieved from "https://femalevillains.fandom.com/wiki/Natalie_Hirst_(Republic_of_Doyle)?oldid=96304"
Community content is available under CC-BY-SA unless otherwise noted.