Miller explains that Havens is safer with him and

she agrees to follow him as they go to pick up Simon Feck, a genius inventor who has created a perpetual battery called the Zephyr. Traveling to Brooklyn, Miller and Havens discover that Feck has fled from the warehouse he was hiding in, leaving a clue for Miller about his location. They are then attacked by henchmen sent by Spanish arms dealer, Antonio Quintana. After again being drugged, Havens drifts in and out of consciousness between their capture and escape from Quintana's men, and Miller brings her to an island that is off the grid, which Miller uses as a safe house. Accepting a call from her sister after leaving in frustration, Havens accidentally leads Quintana's men straight to the hideaway. They try to kill Miller and Havens with an unmanned aerial vehicle. Before they escape by helicopter, Havens is knocked-out by Miller since she is afraid of flying.

Miller reunites with Feck and they, with Havens, get on a train heading for Austria. Havens is attacked by Bernard , an assassin sent by Quintana to retrieve the Zephyr and Feck, and kill Miller. But Miller and Havens fight him and he is killed by another train. Arriving at Salzburg, the three check into a hotel. Miller later leaves to meet with Naomi  Quintana's henchwoman, to make a deal. Havens follows him and listens to Miller's conversation, mistaking that he does not care for her. She is then picked up by Fitzgerald and C.I.A. Director Isabel George, who reveal that Miller was using her at the airport to smuggle in the Zephyr when they bumped into each other and convince her that he doesn't love her. They also tell her that Miller is the traitor and plans to trade the battery with Quintana. Heartbroken, Havens allows the C.I.A. to find Miller back at the hotel. Miller escapes with the battery, but is seemingly shot on the rooftop and falls to his death in the river. Feck is taken into custody afterwards to Schwedelbach, Germany, though it is later revealed that Fitzgerald has been the real traitor all along and he captures Feck.

Leaving a message on her own answering machine that she has the Zephyr, she is captured by Quintana's men and taken to Sevilla, Spain. She is drugged with a prototype truth serum before being rescued by Miller, who was tracking Fitzgerald, who was delivering Feck to Quintana.

Chaos erupts throughout the streets and Quintana is killed by a bull stampede. 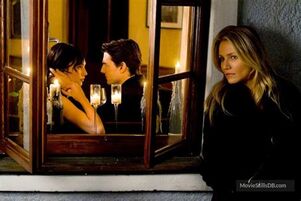 Failed Eavesdropping
Add a photo to this gallery
Retrieved from "https://femalevillains.fandom.com/wiki/Naomi_(Knight_and_Day)?oldid=203828"
Community content is available under CC-BY-SA unless otherwise noted.