Start a Wiki
watch 01:51
The Loop (TV)
Do you like this video?
Nancy Breyers (Kelly Lynch) is a villainess from the 1990 film Desperate Hours (a remake of the 1955 film of the same name). She was a defense attorney and the illicit lover of her client, Michael Bosworth (the film's main antagonist). The film's events also reveal Nancy as a conspirator in Michael's plan to escape prison after he was conviced of bank robbery and manslaughter and served three years in prison.

The film opened with Nancy driving a car out to a remote desert before taking a bus to a courthouse, where she attended a hearing regarding Michael's potential release from prison. As part of their plan, Michael put on a show of aggression towards Nancy before she asked the judge for a moment to confer with her client. As Nancy and Michael were brough to a cell to discuss, it was shown that Nancy had snuck a gun into the courthouse in her panties, with Michael slapping Nancy before taking the gun and pointing it at the attending guard when he rushed in to Nancy's defense.

While posing as a defenseless hostage against Michael, Nancy handcuffed the guard at Michael's orders before her lover broke the man's neck and the two fled. After Michael assured Nancy that everything he did to her was because he needed her and Nancy agreed to continue playing her role as a scared hostage, Michael ripped Nancy's clothes after tying her hands with her scarf before escaping the courthouse and escaping with his brother Wally and accomplice Albert, assuring Nancy that he would wait for her so they could make their ultimate escape together. As Michael made his escape with his cohorts and took retired war veteran Tim Cornell and his family hostage while hiding from authorities, Nancy was brought in for questioning, with FBI agent Brenda Chandler quickly seeing through Nancy's facade.

Rather than interrogate Nancy, however, Brenda made the decision to instead release her from custody, realizing she planned to meet up with Michael to make their escape and wanting the chance to capture them both. With the FBI tailing her, Nancy drove back out to the desert and attempted to call Michael on a payphone, only to flee after receiving no answer and seeing the police were following her. Nancy was ultimately caught and brought into police custody, agreeing to cooperate in capturing Michael in exchange for not being charged for her role in Michael's escape. After calling Michael at the Cornell household, Nancy was prepared to go to Michael by the FBI, with Brenda deciding not to have Nancy wired for fear that Michael would search her and discover it.

Prior to the meeting, Nancy broke down in tears to Brenda, claiming to be afraid that Michael might figure out she turned on him and killed her and threatening not to go through with the deal if she wasn't given a gun. Reluctantly, Brenda acqueisced to Nancy's request and gave Nancy a gun, but unbeknownst to the villainess, the agent had emptied the gun before giving it to her. Upon arriving at the Cornell house, Nancy was fondled by Michael (who figured the police had tried to make Nancy betray him) before presenting her with a ring belonging to Tim's wife Nora. Michael's escape plan was complicated by the arrival of Kyle (the boyfriend of the Cornells' teenage daughter May), and as May was sent off to leave with Kyle, Michael revealed his intentions to leave with Tim to prevent the Cornells from calling the police after he left.

As Michael prepares to make his escape with Tim, Nancy, and Wally, however, he picked up on Nancy's fearful response to seeing the house surrounded by snipers, screaming for them to stop as a shootout began. The four retreated back into the house and a wounded Wally ultimately died in Nancy's lap, much to her horror. Michael was ultimately shot to death by the FBI after refusing to surrender, and after walking out of the house, Tim took Nora's ring off of Nancy's finger before the villainess was handcuffed and arrested. 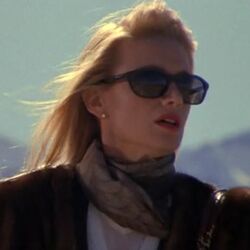 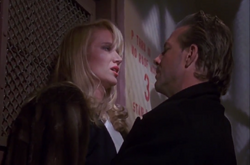 Nancy with Michael during the escape
Add a photo to this gallery
Retrieved from "https://femalevillains.fandom.com/wiki/Nancy_Breyers_(Desperate_Hours)?oldid=164956"
Community content is available under CC-BY-SA unless otherwise noted.