Start a Wiki
watch 01:48
The Loop (TV)
Do you like this video?
Mysto’s Henchwomen are villainesses from the animated series Fangface. They appear in the 1978 episode Don't Abra When You Cadabra.

The unnamed henchwomen dress in leotards and boots, and they also partially cover their face with eye masks.

Mysto The Magician creates a super wand that is so powerful it can bend buildings over sideways, and he plans to use it to take over the world. At the start of the episode, his henchwomen help him steal a box of scientific equipment from a train that will help him create his super wand. Other than that they don’t see much action, but are always by his side and willing to help him with his evil plans.

At the end of the episode, Mysto is flying around New York City in a helicopter and showing off his power by bending buildings over sideways. He and his henchwomen are eventually stopped by the heroes when they get a hold of his super wand and fly it through his helicopter and into a building. The villains are stunned silly, and at the end of the episode it is confirmed that Mysto was arrested. The fate of his henchwomen isn’t mentioned, but it is presumed they shared a similar fate. 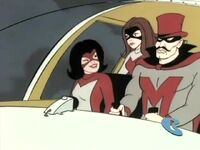 Mysto and his evil henchwomen 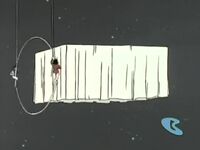 The girls help steal some science equipment to help create... 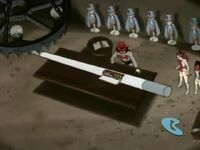 ...Mysto's super wand. A wand to help him rule the world! 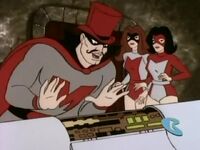 The henchwomen listen as Mysto explains his evil plan 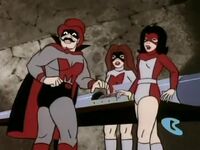 The villains spy some heroic intruders... 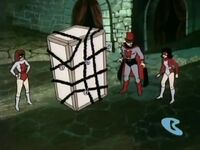 ...but manage to capture them 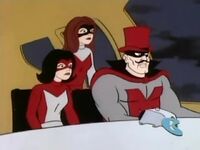 The villains fly around New York to show off their new power... 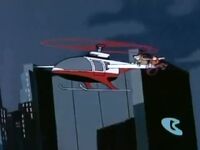 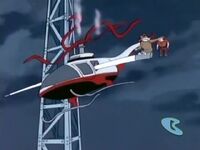 ...who cause the villains to crash 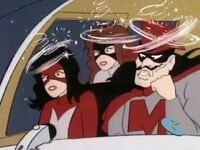 The evil trio are defeated and dizzy from the crash
Add a photo to this gallery
Retrieved from "https://femalevillains.fandom.com/wiki/Mysto%E2%80%99s_Henchwomen_(Fangface)?oldid=181140"
Community content is available under CC-BY-SA unless otherwise noted.