Rougetsu Toshi XII: Chapter 1 - "Ritual". Mutsu, along with her companion Rei, assume the role of teachers at Nashi Academy by unknown means. There, they infect the students (all of them female) in her class with parasites. The parasites assess the strength of each of their hosts and give the stronger ones male genitalia so that they, at Mutsu's command, can rape the weaker ones. If any student tries to escape this fate, the parasite is trained to kill her immediately. After one such student meets this fate, the partner that was to be paired with the girl is raped by Mutsu herself, as she too has the ability to produce male genitalia at will.

Rougetsu Toshi XIII: Chapter 1.5 - "Aborticide". The weaker students who were raped give birth to full-sized soulless clones of themselves. Mutsu states that her intention is to discreetly release these clones into society so that they can cause chaos and terror. Moments later, however, several members of an organization tasked with taking down evil creatures within the city show up. Mutsu briefly engages in a skirmish with one of the members, but is overpowered and ultimately decapitated, leaving behind the headless body of a toy doll.

Rougetsu Toshi Gaiden Ichi: Chapter 3 - "Erika Part 2". A flashback reveals that Mutsu and Rei were originally both evil spirits who befriended a young child named Erika by taking possession of one of her dolls and a teddy bear respectively. Knowing that Erika was a child born from a human and a demon, the "toys" eventually persuade her to remove the protective charms that her grandmother had placed around their home, so that the three of them can have some "fun". This act allows Mutsu and Rei to assume more humanlike forms. When Erika's grandmother arrives home, Mutsu murders her, and the two demons keep Erika as an enslaved source of sexual energy up until the events of Chapter 1/1.5. 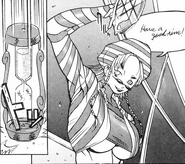 Setting the timer for the for the participants to complete the ritual. 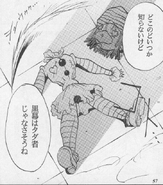