Start a Wiki
watch 01:51
The Loop (TV)
Do you like this video?
Ms. Tasty (Katrina Bowden) is the main villainess from the 2008 comedy movie Sex Drive.

When chatting online with the movie's teenage protagonist, Ian, she discovers he has a desirable car (well, his brother does) and seduces him into travelling to meet her. Ian is still a virgin and desperate to lose his virginity, so he steals his brother's car and goes on a road trip with two of his friends, Lance and Felicia, in order to get laid.

After some road trip fun, Ian finally reaches Ms. Tasty and discovers his previous fears that she might be a guy were incorrect, the beautiful blonde makes him take her for a drive to a secluded location with the promise of sex. However on arrival her true villainous intentions are revealed as her boyfriend appears with a gun and forces Ian to hand over the keys to his car. After unnecessarily humiliating Ian by forcing him to strip naked, Ms. Tasty laughs and gloats about stealing the car and drives off with her boyfriend in it. Unknown to them, Ian's friend Felicia was hiding in the back seat of the stolen car and witnessed everything.

Ms. Tasty then sets her sights on her next target, she gets out of the stolen car and walks over to another car and tries the same routine, but her attempts at seduction don't work for whatever reason, and she gets frustrated. At this point a bunch of characters from earlier in the movie show up, and things get heated. Felicia takes the opportunity to sneak out of the car at this point, but the evil Ms. Tasty notices her and convinces her boyfriend that something needs to be done about her, because she heard all the details of their plans.

The characters then continue their heated exchange, and Ms. Tasty tries to flee the scene, but Felicia stops her and the two have a catfight. The police then show up, Felicia identifies the blonde with a belt for a skirt as the car thief they are after. Ms. Tasty tries to run away but gets knocked down by an opening car door, the wicked villainess is then promptly arrested by the police.

Her wicked intentions are revealed, as her boyfriend points a gun at Ian

After humilating Ian by making him strip naked, Ms. Tasty laughs and gloats, and then drives off

With her boyfriend, and partner in crime

She tries to seduce them, but fails

Seeing Felicia crawling out of the car, she tells her boyfriend to do something about her

She tries to flee, but gets knocked down by a car door 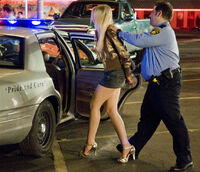 Set Photo
Add a photo to this gallery
Retrieved from "https://femalevillains.fandom.com/wiki/Ms._Tasty_(Sex_Drive)?oldid=148964"
Community content is available under CC-BY-SA unless otherwise noted.