Ms. Grey's backstory revealed that years ago, she gave birth to a baby boy, but she abandoned her newborn son due to her own feeling that she wasn't ready to be a mother. She left the baby at a nearby hospital, where Dr. Bartlett took him in and passed him off as the newborn son of Elizabeth and Edward Martell--doing so to cover up the terrible truth that Elizabeth's original baby died during childbirth.

As time passed, Ms. Grey kicked her vices and became sober, and she went on a search for her son, who was named Jack. After finding out that he was adopted by the Martells, Ms. Grey went to their home and spotted Jack playing with Elizabeth, and later became the family's housekeeper to get close to him. Jack was set to receive a hefty inheritance, but Elizabeth began to figure the truth about Jack: that he wasn't their son. Ms. Grey caught on to Elizabeth's suspicions, and late one night, she killed Elizabeth, doing so to maintain her twisted goal of being with Jack and obtaining the Martells' wealth.

Ms. Grey committed Elizabeth's murder in the beginning of the film, and later on, she put on a warm personality as she welcomed new nanny Kate Jordan (the film's main protagonist) to the home. Kate was hired by Edward to watch over Jack and Rose (the latter being the Martells' actual child), but became quickly antagonized by Jack and his outlandish behavior. It grew to the point where Kate became suspicious about Jack, and seeing this as a repeat of what happened with Elizabeth, the evil Ms. Grey targeted Kate, first by sabotaging her medication--which cause Kate to become loopy during Jack's birthday party.

Kate ended up learning about Jack not being the Martells' son, and later went to Dr. Bartlett after learning that he falsified Jack's birth certificate. Bartlett denied it at first, but later that evening, he phoned Kate and admitted the truth, asking her to meet him tomorrow so he could reveal everything. However, Ms. Grey overheard their phone conversation and decided to silence Bartlett; going to his home and fatally shocking him with a taser. The demented villainess was confronted by Kate a day later, facing accusations of killing Bartlett and being told that she left a phone message to Edward about Jack. This led to Ms. Grey smashing Kate's cell phone and pursuing not only her, but Rose, doing so after the pair escaped. The duo was encountered by Donovan, who they believed would save them, only for him to knock out Kate from behind.

In the film's climax, Ms. Grey had Kate tied up, and she revealed her entire backstory, while also revealing that Donovan was her husband. She was revealed as Jack's biological mother and as Elizabeth Martell's killer, as Elizabeth was getting in the way of her goal of being with Jack and inheriting the Martells' wealth, and she later detailed her plan to kill not only Edward, but Rose as well; sending Donovan to kill the young girl. Ms. Grey's evil plan also involved killing Kate and setting her up as a drug-addled murderess who killed Edward and Rose before killing herself, but the protagonists' escape led to the villainous couple chasing after them, with Kate knocking out Donovan and leaving his unconscious body behind. Ms. Grey later caught Rose and threatened to snap her neck, only for Edward to appear and strike the villainess with a plank, followed by Kate finally defeating Ms. Grey by delivering two blows to her head with a flashlight; the second blow ended up killing Ms. Grey instantly before she could even yell an insult to Kate. 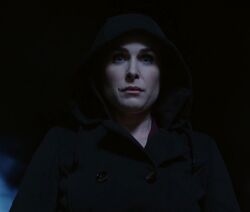 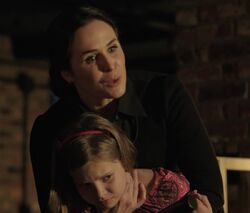 Add a photo to this gallery
Retrieved from "https://femalevillains.fandom.com/wiki/Ms._Grey_(Nanny_Killer)?oldid=221869"
Community content is available under CC-BY-SA unless otherwise noted.