Ms. Biazevich (Karin Konoval) is the true main villainess of "Wrong Number", episode 1.16 of The Haunting Hour (airdate April 2, 2011). She was the elderly neighbor of vicious bully Steffani Howard, who often antagonized her. One day, while listening to loud music with her friend Taylor Turner, Ms. Biazevich came to her room and tried to get her to turn it down. When Steffani refused, Ms. Biazevich told both girls that they were mean and that she was going to show them how to be nice before trying to force her way into the apartment. When Steffani tried to shut the door on her, Ms. Biazevich somehow made the doorknob ice cold, burning Steffani's hand, and then grabbed her hair through the crack before Taylor was able to shut the door.

To get back at her, Steffani began prank calling Ms. Biazevich, prompting her to once again threaten her to be nice. The next day, Ms. Biazevich died and her vengeful spirit began terrorizing Steffani and Taylor, wanting to teach them a lesson for their behavior. Steffani and Taylor consulted Adriana (a Gothic girl at their school Steffani often bullied) for help, to which she sent them to her uncle Constantine for a solution. However, Constantine's solution instead caused Ms. Biazevich's spirit to manifest in Steffani's apartment, sending spiders after the duo when they attempted to hide in the bathroom. After failing to escape the apartment due to Ms. Biazevich using her powers to keep the door locked, Steffani and Taylor tried to appease the vengeful spirit by apologizing and swearing to be good (though Steffani's apology is visibly insincere).

After Ms. Biazevich unlocked the door, Steffani insulted her, causing her to lock the door again due to witnessing how awful Steffani truly was. As punishment, the evil Ms. Biazevich trapped Steffani in her cell phone in the form of a video. Even so, the villainess saw that Taylor had good in her (unlike her friend), and it was for that reason that she unlocked the door and shouted for Taylor to leave, letting her escape. She then smiled in sadistic pleasure as she sent the video with Steffani to Adriana, who was revealed to be her granddaughter and also one of her two co-conspirators, with the other one being Constantine. Adriana deleted the video, essentially killing Steffani, and then smiled at the fact that she had successfully exacted revenge on her bully. 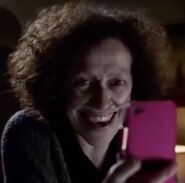 Ms. Biazevich grinning as she captures Steffani in her cell phone

Add a photo to this gallery
Retrieved from "https://femalevillains.fandom.com/wiki/Ms._Biazevich_(The_Haunting_Hour)?oldid=180478"
Community content is available under CC-BY-SA unless otherwise noted.