Start a Wiki
watch 01:48
The Loop (TV)
Do you like this video?
Mrs. Wyatt (Jessica Walter) is the main villainess from "Howl of the Fright Hound," episode 1.10 of Scooby Doo! Mystery Incorporated (airdate October 4, 2010). She is the mother of Jason Wyatt, a nerdy student at Crystal Cove High School who had a crush on Velma.

Mrs. Wyatt worked in military robotics, but she gave it up to focus on raising Jason. When she saw what she believed to be mistreatment of Jason by Velma's Mystery Inc. friends, Mrs. Wyatt plotted to break up the group; using her skills to build a robotic dog to cause a rampage and frame Scooby. Her creation appeared during a tour of Crystal Cove led by Velma's mother, and tore through the tour bus. Mrs. Wyatt's plan works, as Scooby is set up and taken to a prison for the most diabolical animals (with Professor Pericles as one of the inmates).

The group met Mrs. Wyatt when they went to her home under the belief that Jason was behind the building and operating of the robotic dog. The accusations towards Jason further angered his mother, leading the twisted villainess to send her creation towards the group to destroy them. The appearance of the robot cleared Scooby, and it was in the episode's climax that Mrs. Wyatt was revealed as the evil mastermind after the robotic dog was destroyed by Fred and Scooby. Mrs. Wyatt boldly admitted to her scheme, stating that her plan was to separate the group so Jason could have a clear chance at Velma, but decided to destroy them (Velma included) after Jason was questioned. Mrs. Wyatt was arrested by Sheriff Bronson Stone, and led away in handcuffs while continuing her rant. 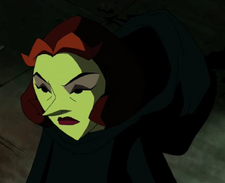 Mrs. Wyatt being led away by police
Add a photo to this gallery
Retrieved from "https://femalevillains.fandom.com/wiki/Mrs._Wyatt_(Scooby_Doo!_Mystery_Incorporated)?oldid=93110"
Community content is available under CC-BY-SA unless otherwise noted.