Start a Wiki
watch 01:39
The Loop (TV)
Do you like this video?
Mrs. Potiphar (Joan Collins) is the very sultry maneater of a wife in the 1999 movie/play ‘Joseph and the Amazing Technicolor Dreamcoat’. She is an adulteress, molestor and she framed Joseph for willing adultery.

‘Joseph and the amazing Technicolor dreamcoat, 1999’

Frames Joseph for willing adultery and gets him thrown in prison

In the past Mrs. Potiphar has set many men against her millionaire husband, although he always has to remind her that she is his. Over the course of time, the seductress notices Joseph’s handsome physique and daily tries to seduce him; he rejects her each time. Finally she gets too eager... Firstly, she gets her handmaidens to grab Joseoh and assists in stripping him, even pinching him on the bottom! They grab him and drag him down, molesting him! Meanwhile, Potiphar, in money Room underneath the bedroom hears all the flashing and comes upstairs! Angered, he sends Joseph to the dungeons while the bad girl sits elegantly, posing and smoking her pipe, apparently not receiving a punishment. 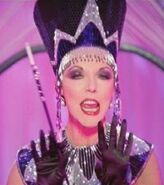 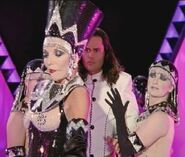 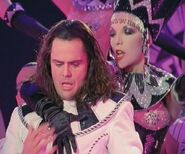 Add a photo to this gallery
Retrieved from "https://femalevillains.fandom.com/wiki/Mrs._Potiphar_(Joseph_And_The_Amazing_Technicolor_Dreamcoat)?oldid=206808"
Community content is available under CC-BY-SA unless otherwise noted.