Start a Wiki
watch 01:51
The Loop (TV)
Do you like this video?
Mrs. Fothergill (Rossella Falk) is a villainess from the 1966 movie Modesty Blaise.

She is a henchwoman who enjoys killing people to cure her boredom.

One instance is when a mime, who is also a spy, is delivered to her. She eyes him, looking a bit disappointed. He starts performing, not knowing who she is and what she does. She throws him around a bit to warm up and then casually removes her robe to reveal her bikini-clad body. He follows her as she walks regally and signals for him to crawl between her legs. She clenches her legs around his neck and chokes him, looking into his eyes with sadistic glee as her legs squeeze the life from his body. Then she lifts his body overhead and heaves it over the cliff onto the rocks below and then turns and throws a victory kiss to the gang leader, who is having a drink as he watches excitedly from a distance.

Throughout the movie, Mrs Fothergill has been lusting to fight and kill Modesty, the heroine. In the end they encounter each other on a terrace. Modesty has a gun. Mrs Fothergill could yell to the armed guards and dive back into the doorway she had just emerged from, but she is hungry for her death fight. She nods towards the armed guards, signals that she wants to fight. Modesty puts her gun down and they square off. Early in the fight, Modesty gets a loop of rope around Mrs. Fothergill's neck. This has no effect and Mrs Fothergill overpowers Modesty, forces her down, wraps her hands around her neck and gleefully begins to strangle her, apparently lost in the orgasmic delight of squeezing the life out of her foe. Modesty's partner, Willy, sees that the rope is tied to a heavy bucket resting on a ledge and rushes to kick it off. Too late, Mrs Fothergill realizes what is happening and has a moment to struggle desperately with the rope before she is swept up into the air and is last seen hanging lifeless below the pulley.

Choking the mime between her lethal legs

Enjoying watching the mime struggling between her legs

Enjoying the sight of the dead mime

The mime's life is taken by her deadly legs 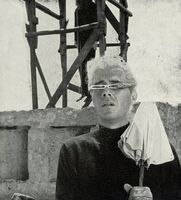 Mrs. Fothergill in a pink top and white skirt

Add a photo to this gallery
Retrieved from "https://femalevillains.fandom.com/wiki/Mrs._Fothergill_(Modesty_Blaise)?oldid=178186"
Community content is available under CC-BY-SA unless otherwise noted.