The Female Villains Wiki
Register
Don't have an account?
Sign In
Advertisement
in: 1990s, Book Villainess, Brunette,
and 8 more

Mrs. Dark (Lynne Cormack) is a hidden villainess from "The Girl Who Cried Monster," the eighth book of the Goosebumps series, as well as the Goosebumps TV episode under the same title (airdate November 11, 1995). She is the mother of the episode's main protagonist, Lucy Dark.

In the episode, Lucy was shocked to discover that the local librarian, Mr. Mortman, is actually a monster, as she witnessed him in his monstrous form munching on spiders. Her claims are met with disbelief from her parents, mainly because she had been tormenting her brother, Randy, with stories about monsters, but she is pursued by Mortman throughout the episode. During the latest encounter, Mrs. Dark invited Mortman for dinner, with Mortman accepting.

The climax has Mortman dining with the Darks, and when Mortman asked what was for dinner, Mrs. Dark responded that they were having him. Mortman took the response as a joke, but at that moment, Mrs. Dark turned heel and revealed herself as a monster, with her husband following suit. The villainess also revealed that they were serious in their response, that they planned to eat Mortman, which they did after they fully transformed into ravenous monsters. The villainous parents also revealed to Lucy and Randy that they were also monsters, though they weren't fully developed yet, and they were instructed not to tell anyone about their identity, out of fear of being publicly outed.

Mrs. Dark stated that Lucy's claim about Mortman wasn't believed because he was the first one seen in 20 years, and after seeing what they believed was another monster, the evil Mrs. Dark unleashed her fangs and prepared to attack, as did her husband. However, the "monster" was revealed as Lucy's friend, Aaron, wearing a costume, and he was invited in for dessert by Mr. Dark. 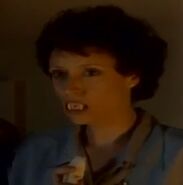