To keep her youth by any means necessary

Turned to dust after losing her youth

Before the events of the movie, Mother Gothel hid a magical flower born from the sun’s dew, that keeps her young whenever she sings to it. One day, the flower was found and given to the queen so she doesn’t die from childbirth. All the flower’s power was transferred to the queen’s daughter, Rapunzel. One night, Gothel tried to use the flower’s power in the baby’s hair, but her hair loses its healing powers when it’s cut off. Instead, she abducted Rapunzel, and kept her in a hidden tower for 18 years, where Gothel acted like Rapunzel’s actual mother, convincing her that the outside world was a dangerous place.

When Rapunzel turned 18, she begged to see the floating lanterns on her birthday, but Gothel refused through a Villain Song (Mother Knows Best) and refused angrily. Rapunzel tricked her by saying that she wanted new paint on her birthday, something that would take three whole days for Gothel to obtain. Reluctantly, she agrees to get it for her.

However, when she sees Maximus, the guards' horse, she worries that someone was searching for Rapunzel. When she arrives at the tower, she's frightened to find that Rapunzel was already gone. Believing she was kidnapped, Gothel takes a sharp dagger from her drawer and sets out to find her. She passes by the Snuggly Duckling Inn and while listening to the thugs and Rapunzel sing, she realizes that no one kidnapped Rapunzel, but she instead left with a wanted criminal named Flynn Rider (Eugene) Deeply furious, when one of the men staggers outside and attempts to flirt with her, she threatens him with her dagger unless he tells her where they are.

When she finds them, she runs into the Stabbington Brothers, and she gives them a choice to either take the princess’ tiara that Flynn stole earlier, or revenge on Flynn. They chose revenge. When Gothel encounters Rapunzel, she tells her that Flynn is only with her to take the tiara. Rapunzel doesn’t believe her, and agrees to put Flynn to the test, giving Rapunzel the crown and telling that he would simply take it and leave her.

Soon after, the Stabbington Brothers take the tiara, knock out Flynn, and bound him to a boat, making it look like he’s abandoning Rapunzel. They try to kidnap her, but Gothel betrays them and knocks them out. She comforts a heartbroken Rapunzel and takes her back to the tower, once again putting on the persona of a loving mother. Through her experiences with watching the lanterns, visions of her past, and finally wearing the tiara, Rapunzel realizes that she’s the lost princess, and that Mother Gothel was not her mother at all, but an evil schemer trying to use her hair’s power to keep her youth and beauty.

Rapunzel angrily confronts Gothel, and says that she’s never using her hair’s power again. Enraged, Gothel chains up Rapunzel and gags her. When Flynn broke free from prison, he went straight to Gothel’s tower and shouted for Rapunzel to let down her hair so he’ll climb up. Rapunzel’s hair was let down for Flynn, but it was a trap. After Flynn sees Rapunzel chained up, Gothel stabs him in the back, and vows to lock Rapunzel away where no one will find her. Rapunzel begs Gothel to heal Flynn on the condition that she will be hers forever. Gothel agrees, but chains Flynn up in case he tries to rescue her.

Rapunzel was about to heal Flynn, but he cut off her hair with a shard from a broken mirror. Gothel looks in horror as Rapunzel’s hair loses its power, and her age rapidly catches up with her. She caught a glimpse of her face in the broken mirror. While trying to hide her face, Pascal, Rapunzel’s chameleon, pulled the length of Rapunzel’s cut hair to trip Gothel from the tower window. As she falls, she crumbles into dust and by the time she hits the ground, all that remained of her was her cloak.

Mother Gothel as she reverts back to her true age 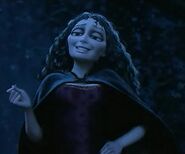 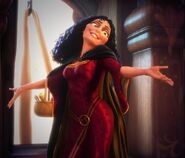 Gothel making a deal with the Stabbington Brothers.

Gothel’s cloak after falling from the tower.
Add a photo to this gallery
Retrieved from "https://femalevillains.fandom.com/wiki/Mother_Gothel_(Tangled)?oldid=205968"
Community content is available under CC-BY-SA unless otherwise noted.