Start a Wiki
watch 01:51
The Loop (TV)
Do you like this video?
Moth is a moll/henchwoman to the Riddler in the live action 60s Batman tv show. She is played by Linda Gaye Scott.

The Ring of Wax

Give 'Em the Axe

The Riddler (Frank Gorshin) smuggles a ring of a revolutionary new Universal Wax Solvent, capable of eating through anything. After getting it into the country he hides it inside a wax statue of Batman, which is intended for display at Madame Soleil's Wax Museum. In place of the wax Batman statue is a wax replica of the Riddler. At the statues unveiling, Riddler subsequently sprays the attending audience with a gun filled with paint, while a tape recorder announces two riddles.

Inside his hideout at the Kandle Lite Kandle Factory, the Riddler and his henchgirl, Moth, melt the Batman figure into a vat of boiling wax; Batman (Adam West) and Robin (Burt Ward) solve the puzzles and arrive at the Gotham City Public Library and find the Riddler and his henchmen, Tallow (Joe E. Tata) and Matches (Michael Greene), attempting to steal a rare book on the lost treasure of the Incas from the vault with the use of the solvent. A battle breaks out, but the Prince of Puzzles uses his Doctor Riddler's Instant Forever-Stick Invisible Wax Emulsion to glue two heroes’ feet to the floor. This enables the Riddler and his gang to escape with the book!

Moth - appearance, character and role in the story -

Moth is a sexy and beautiful blonde in her 20s, who wears a purple catsuit and cape. She is a typical henchwoman and girly, interested in being rich and excited to commit crime but very cowardly. Like a real life Moth..she went too near to a flame..and got "burned!"

Moth attempts to flee cowardly, only to fall backwards into the Maiden's Bath where she is then trapped by Batman to be picked for the police, much to her shock. When they arrive she tries to talk Batman out of her arrest by saying she has learned her lesson "crime doesn't pay",  but Batman tells her that she learned her lesson too late by going far into Riddler's scheme; "Moths who hang around candles are bound to be burned." She is then taken away.

Moth is a typical henchwoman, only there to be pretty and not a competent villainess. Although she enjoys crime, she is cowardly and learns the hard way that crime does not pay. 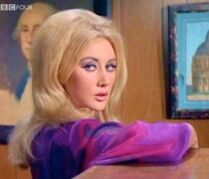 A sexy Moth spies for the Riddler 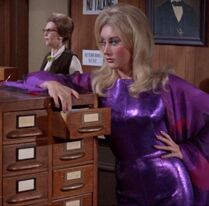 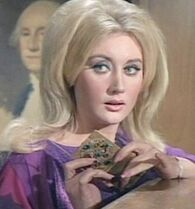 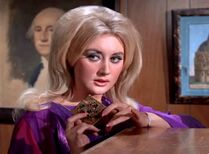 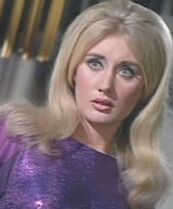 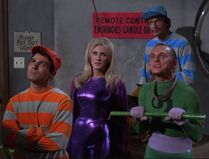 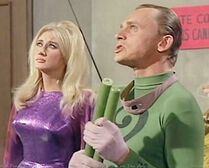 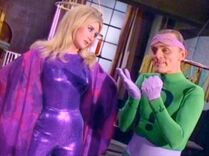 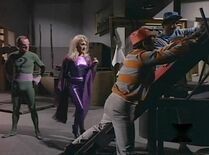 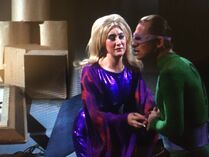 I don't know about you, Riddler honey, but I'm getting out of here!

Upon attempting to escape Moth stumbles into the Maidens Bath 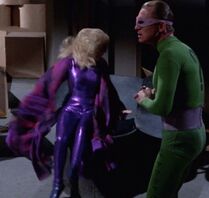 With a pained expression on her face and heels in the air, Moth falls to defeat into the aptly named Maidens Bath 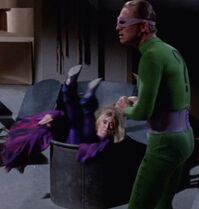 As one door closes, a shocked Moth realizes that so will the other one and she will be encased in The Maidens Bath 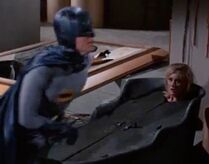 Moth gets hauled away to jail.

After her pleading fails, the reality hits Moth that she is going to jail for a long time

With a final glance back at her captor, Moth is marched off to jail 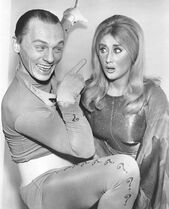 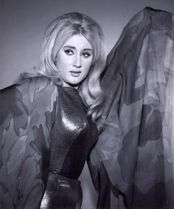 Add a photo to this gallery
Retrieved from "https://femalevillains.fandom.com/wiki/Moth_(Batman)?oldid=200234"
Community content is available under CC-BY-SA unless otherwise noted.