The Female Villains Wiki
Register
Don't have an account?
Sign In
in: 1960s, Attempted Murder, Blonde,
and 14 more

View source
watch 01:28
Wiki Targeted (Entertainment)
Do you like this video?
Play Sound

"Night of the flying pie plate"

Ruthless. Greedy. Morn less ruthless than the others, at least in regard to Jim West.

Morn, Pan and Alna are 3 beautiful young women masquerading as aliens. The women are all blonde, have their skin artificially colored a shade of green, and wear sparkling, spangly "otherworldly" outfits, including futuristic shiny pants. It later emerges they are really a trio of vaudeville players hired as larcenous henchwomen to aid the male villains. Morn (real name, Maggie) is the main spokeswoman for the" aliens". Falling for the charms of agent Jim West (Robert Conrad), to an extent she tries to help him avoid danger - but she never actually changes to the side of virtue. Pan and Alna show no similar traits.

Role in the story -

The three women "aliens" emerge from a supposed UFO which has been "forced to land" on the outskirts of a western town. They claim to be travelers from Venus, though are actually part of an audacious plot to steal the federal government gold being kept temporarily in the town, guarded by agents James West and Artemus Gordon (Ross Martin), as well as some soldiers. Morn decoys Jim at a picnic, while in town the other girls are busy knocking out Arte and the guards with their "outer space" gas guns and helping male villain Ben Victor (William Windom) take the government gold from the safe - carrying it away in a wagon along with a kidnapped Artemus Gordon. After also taking Jim prisoner, the villains plan to blow the 2 federal agents up in the phony UFO.

Gas guns to knock out their victims.

In the climax of the episode after the male villains are vanquished, Arte gets himself into a wild comical scuffle with the criminal girls in the covered wagon. Morn climbs into the front to join Jim at the reigns and starts to get romantic with him; West matter of factly says to her that all the girls are all going to jail. Later in their special train Jim gets a telegraph message that Pan and Alna have been given 5 - 10 years in jail and Morn 1 year (presumably a lesser sentence because she had, to an extent, tried to help West out). 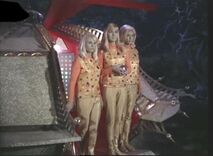 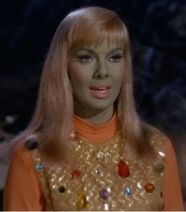 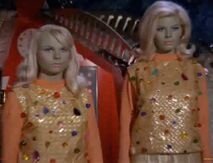 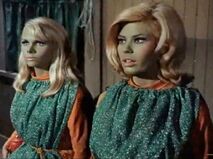 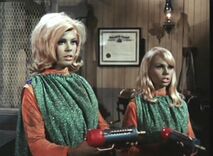 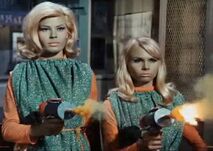 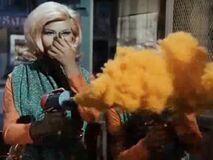 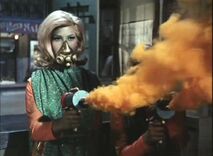 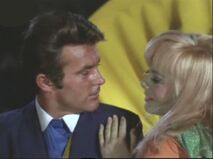