Start a Wiki
watch 04:10
The Loop (TV)
Do you like this video?
Monica Gordo aka Evelyn King (Bethany Lauren James) is the villainess of the 2016 film The Follower (originally titled The Muse).

Monica's slight backstory revealed that, as a child, her mother took her from her father and the two began living on the streets. While her mother's reason for leaving her husband was unknown, Monica began to resent her mother for refusing to take her home, but would later come to believe her mother was trying to make her strong. It was also during her childhood that Monica became a fan of country pop singer Chelsea Angel (the film's main protagonist), with her mother even driving to New York so Monica could see her in concert. But afterwards, Monica was heartbroken when she found her mother had left her, resulting in Monica being placed in foster care and being moved between homes frequently.

In adulthood, Monica joined the Air Force and became an ROTC pilot, but was forced to resign due to mental health issues. The film's current events would also reveal that Monica's adoration of Chelsea became a psychotic obsession, even developing delusions that she and Chelsea were childhood friends, but that Chelsea forgot about her due to having a chip installed in her brain by all the people in her life. Her obsession with Chelsea would ultimately drive Monica to begin plotting to abduct Chelsea, implementing her plan right as Chelsea was preparing to take a break from her music career to focus on her pregnancy.

Monica's plan had her posing as a flight attendant on the private plane Chelsea and her manager Ashley ("Ash" for short) were taking back home, having stolen the identity of a flight attendant named Evelyn King. After drugging Chelsea, Ash, and the pilot, Monica intentionally crashed the plane near her isolated house, setting the wreckage on fire to cover her tracks and kill Ash and the pilot before taking an injured and incapacitated Chelsea back to her house, chaining her to her bed so she wouldn't be able to leave.

Initially, Monica (who had donned a blonde wig to disguise herself) put on a persona of having been kidnapped alongside Chelsea, chaining herself up to make it appear someone else had taken them both to the house and later claiming to have gotten a neighbor to call help for them. But ultimately, Monica's ruse was discovered when she became aggressive against Chelsea's attempts to leave when no one came by the next day, with Monica removing her wig and referring to herself as Chelsea's "spiritual twin". Monica then went on fully show her delusional adoration with Chelsea, claiming she hadn't meant for Chelsea to get hurt and that she could convince her that kidnapping her was for the best. Realizing Monica was dangerous, Chelsea attempted to convince Monica to take her to a doctor, only for Monica to viciously refuse and order Chelsea to do as she said and be nice, proclaiming that if anything happened to her, she and her baby would die.

Monica later detailed to Chelsea in full how she went about getting her to her home, revealing that she'd planned it for a while and the next phase of her plan: allow everyone to believe Chelsea had died before having her return and make a comeback in her music career, even planning to write an album with Chelsea. Monica would later show her psychotic colors when she snapped at Chelsea for failing to properly cut a cloth while showing her how to make a doll like she one she made in Chelsea's likeness, later seemingly punishing Chelsea by painfully stitching up her leg wound while revealing she intended to "make Chelsea strong again" like she believed her mother did with her. Later on, Monica became frustrated when Chelsea failed to memorize the choreography from one of her old music videos, tearfully revealing how she had been separated from her mother and how Chelsea's music got her through her time in foster care.

The evil Monica also revealed her belief that Chelsea would never love her as much as her baby, and attempted to force Chelsea to take a Misoprostol pill to terminate her pregnancy. Chelsea refused and attempted to convince Monica the baby wouldn't change their "bond", eventually dissuading Monica by telling her that the pill would also kill her and make it to where Monica wouldn't be able to hear the song she was writing. Wanting to hear Chelsea's song, Monica told Chelsea she had until the next day to finish her "song". While doing Chelsea's hair, Monica had Chelsea sign a contract to have Monica become a manager and tried to convince her to sign a form to give her baby up for adoption, threatening Chelsea with a curling iron when she refused to do so or sing any of her supposed "song". Chelsea was able to calm Monica by telling her she needed a guitar to compose, with the villainess leaving after threatening to kill Chelsea's baby if she didn't write a good song.

While Monica was out, Chelsea managed to escape her chains and escape from the house, only to run into Monica as she was driving back. Enraged, Monica beat Chelsea unconscious with the guitar before taking her to her shed, tying her to a chair and gagging her with duct tape. After recounting a story of how her mother pulled out one of her teeth after she had it chipped by a bully throwing a rock at her, Monica proceeded to use a pair of pliers to pull one of Chelsea's teeth, ignoring Chelsea's attempt at telling Monica there was no microchip in her teeth (as Monica delusionally believed her mother meant when she said her tooth was chipped). Afterwards, an agonized Chelsea told Monica her mother abandoned her rather than being taken from her as she believed, with Monica refusing to believe so and attempting to force Chelsea at gunpoint to sing her song, saying whether or not she did so would determine if her death was painless or not.

At that moment, however, a knock was heard at the door, with Monica going to answer it after threatening to kill the person and then Chelsea if she made a sound. The person at the door was revealed to be Frank, another fan of Chelsea's who had been helping her husband Dillon try to rescue her, having gotten Monica's real identity and address after finding out she stole Evelyn King's identity. Frank managed to convince Monica to let her in by claiming to be a health inspector, but failed to find Chelsea while checking out the shed due to Chelsea cutting herself free and hiding behind the door. When Monica saw Frank's "Chelsea Angel" tattoo and realized he was looking for Chelsea, the evil Monica went after Frank and killed him with a bullet to the head.

When Monica returned to the shed, Chelsea shoved the door into her, disarming her of her pistol before getting into a brawl with her captor. Monica managed to overpower Chelsea and began trying to strangle her, with Chelsea subduing Monica by stabbing her in the eye with her pliers. Shortly afterwards, the police and Dillon arrived and Chelsea was rescued, but Sheriff Cooper went to the shed to find Monica had survived being stabbed and escaped. The final scene of the movie had Chelsea performing her newest song, Mountain Lions, only to be stunned to see Monica in the crowd, now sporting an eye patch. The film ends without revealing Monica's ultimate fate. 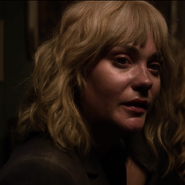 Monica in her wig 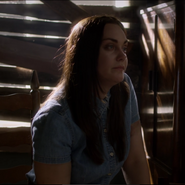 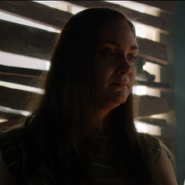 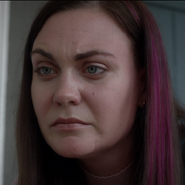 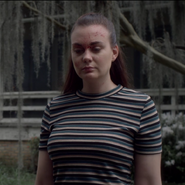 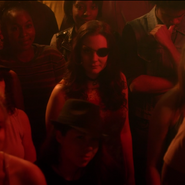 Monica in the film's final shot
Add a photo to this gallery
Retrieved from "https://femalevillains.fandom.com/wiki/Monica_Gordo_(The_Follower)?oldid=140675"
Community content is available under CC-BY-SA unless otherwise noted.