Start a Wiki
watch 01:48
The Loop (TV)
Do you like this video?
Mona Demarkov (Lena Olin) is the main villainess in the 1993 crime film "Romeo is Bleeding".

Mona is a sociopathic Russian mob assasin in the film.

NYPD homicide detective Jack Grimaldi (Gary Oldman) seems to have everything; a beautiful wife named Natalie (Annabella Sciorra), and an adoring teenage mistress named Sheri (Juliette Lewis). However, his lavish lifestyle is funded through extensive corruption, doing favors for Italian mob boss Don Falcone (Roy Scheider) in exchange for large cash bribes. His latest task is to reveal the location of Nick Gazarra, a mobster-turned-state's witness protected by federal agents. Gazarra and his protection detail are subsequently killed by a mob hitwoman, Mona Demarkov. Grimaldi is disaffected by this outcome, being uncomfortable with his complicity in the deaths of other law enforcement personnel.

Mona is arrested and Falcone gives Grimaldi a new assignment, to kill Mona, whom he fears could not only testify against him, but be planning to take over his entire operation. Still reluctant about his double life, Grimaldi is assigned as Mona's minder as she is transported to a safe house to await pick-up by federal agents. Upon arrival, Mona quickly seduces and tries to kill him, but their impromptu tryst is interrupted by the arrival of the agents and Jack leaves her to be detained.

Falcone, disappointed in Jack's ineptitude, orders one of his toes amputated. Realizing he has endangered both his wife and mistress, Jack instructs Natalie to leave the city immediately, giving her all the payoff money he has saved as well as instructions of where to meet him out West when the time is right. Jack ends his affair with Sheri and puts her on a train out of the city. Jack tries to hunt Demarkov but is attracted to her sexually and no match for her professionally. Mona forces him to assist in burying Falcone alive, then offers to pay Jack to help her fake her own death.

Although he obtains false papers for her, she refuses to pay and attempts to strangle Jack. He shoots and wounds her in the arm, then tries to drive away with her handcuffed in the back seat. Mona escapes by hooking her legs around his neck, causing him to crash the car. She slithers out through the shattered windshield without freeing her hands.

Mona lures Jack to an empty apartment. He again attempts to kill her but is tricked into shooting Sheri instead. Mona fixes the corpse so as to suggest that it was she, and not Sheri, who died. Mona has Jack abducted and transported to an abandoned warehouse: she handcuffs him to a bed and they have sex.

Mona then betrays Jack by turning him into the police, copping a plea deal that will indict Jack for the multiple murders that she tricked him into committing. The police arrange a confrontation between Jack and Demarkov at the courthouse, as he is heading in and she is heading out. She threatens to kill his wife, prompting Jack to grab a gun from the ankle holster of a fellow officer and shoot her dead. He turns the gun on himself, only to discover that the revolver is empty.

Instead of being sent to prison for the murder, he is given a commendation. This frees him to begin a new life in the West, under the identity of "Jim Daugherty". The final scene shows Jack living alone in a remote desert town and working as a bartender. He longs for Natalie's return and laments the loss of his old life. 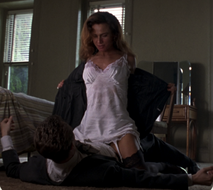 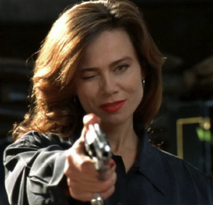 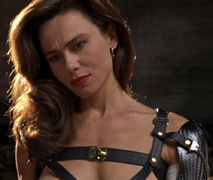 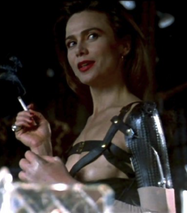 Add a photo to this gallery
Retrieved from "https://femalevillains.fandom.com/wiki/Mona_Demarkov_(Romeo_is_Bleeding)?oldid=196017"
Community content is available under CC-BY-SA unless otherwise noted.