Mona Champagne (Katherine Hiegl) was the main villainess of the 2015 film Home Sweet Hell. She was the wife of furniture store owner Don Champagne and the mother of their two children, Allison and Andrew.

Mona's first scene of the movie quickly established her psychotic demeanor, as shown by her warning her children (who were fighting over a video game) that she would make them watch as she destroyed their game system if they couldn't argue constructively, reminding Andrew that she'd already went about destroying his Legos under similar circumstances. The film's progression also showed Mona as being obsessed with perfection and achieving her extravagant goals, even creating a detailed scrapbook of all her plans for herself and her family.

Mona was also shown to be highly demanding and strict regarding her family, with her schedule on how often she nad Don had sex leading Don to become attracted to (and eventually begin an affair with) flirtatious new employee Dusty. Mona eventually met Dusty for the first time during a barbeque being held at their house, looking down on her for being an employee of her husband. After Don was informed by Dusty that their dalliance led to her becoming pregnant and that she was in need of money, Don went to Mona and confessed to his infidelity, begging for his wife's forgiveness as she emotionlessly got out her scrapbook of goals. Eventually, Mona asked Don if Dusty intended to abort her pregnancy and if he had told anyone about the situation, with Don answering No to both despite having confided in his work partner Les. Mona also asked if Don wanted a divorce, to which he proclaimed he didn't and loved his family and his and Mona's shared goals.

It was then that Mona turned heel by claiming there was only one solution: Don would have to kill Dusty, angrily stating she wouldn't let her husband "father a bastard" and expressed concern for their children, though most of her concern was towards how their friends and community would react. Don's wariness to kill Dusty was met with loud outrage by Mona, who blasted Don for his affair and proclaimed he would be nothing without her. After Dusty called Don and demanded $25,000 from him under the threat of telling Mona about their affair, Mona (who had been listening over speakerphone with Don) blasted Don for letting Dusty extort him and stated that she and their children deserved better than that, goading her husband into helping her plot to kill Dusty. Mona then gave Don crushed medication to poison Dusty with when she met him at the store to get her money, and after the drugs rendered Dusty unconscious, Mona appeared and chided Don for telling Dusty that Mona had made him poison her before telling him to put her body into the trunk of their car.

Upon arriving at their house, however, Don was horrified at the revelation that Dusty was still alive, with the evil Mona giggling before telling Don to get a hammer, wanting her husband to finish Dusty off by bludgeoning her to death. Mona attempted to browbeat Don into committing the act, but eventually opted to do so herself, forcing Don to open the trunk and allow her to finish off Dusty with a single blow to the head. While Don went to vomit, the psychotic villainess went about disposing of Dusty by sawing her body into pieces and having Don bury them in the garden, while also informing him that Dusty lied about being pregnant.

Don was later confronted by Dusty's boyfriend Murphy and his friends Freeman and Benji in a strip club, and after Dusty claimed that Dusty had went to Dallas with $20,000 she had promised to get for him, Murphy ordered Don to pay him that amount by the next day under the threat of harming his family. After being told what had transpired by a horrified Don, Mona began forming a plan to stop Murphy and his crew by having Don (much to his dismay) dig up Dusty's dismembered body and drive to the trailer the gang shared, where Mona went inside and placed Dusty's body parts in the freezer.

Mona's plan hit a snag, however, when Freeman and his girlfriend Lynn arrived, with Mona being spotted by Lynn trying to escape after Freeman went to get his girlfriend a "surprise". Mona went along with Lynn's belief that Mona was Freeman's surprise, and when Freeman came in and recognized Mona, the villainess stabbed Freeman with a knife she had hiding behind her back before killing Lynn by skewering her with a Samurai sword. As Mona and Don fled the scene, with the former using a disposable phone to report a disturbance at the trailer, Freeman managed to call Murphy and tell him what Mona had done before dying of his injuries, with him and Benji coming to the trailer to find him and Lynn dead. Soon after Murphy found Dusty's body in the freezer and realized he was being set up, the police arrived to arrest the men, with Benji being shot to death by the police while Murphy managed to escape.

With the police convinced Murphy was responsible for Dusty's murder, Don talked to Mona as they were getting ready for bed, asking her if her parents did anything to her that made her the way she was. In response, Mona burst into tears and proclaimed her parents were perfect and that her issues had nothing to do with them, and later threatened to gut and dismember her husband if he ever asked such a question again. Mona then brought up Les's son AJ, who was in Little League with Andrew, with Mona accusing the boy of taking steroids and claiming it was ruining Andrew's self-confidence playing against him, suggesting they "get rid of" the two. It was during the party the next day that Don discovered the body of their neighbors' dog in the freezer, having been killed by Mona due to the dog having frequently gotten on their property.

Mona additionally lashed out AJ while he was hitting the pinata, accusing him of being too old for Little League and Les of being an alcoholic, while also telling his wife Abby she was happy she had Chron's and hoped she died from it. After the couple made their leave, Mona gave the stick to Andrew and told him to hit the pinata, with her prompt becoming a furious snarl to her son before she became frustrated with Andrew's repeated misses and had Allison (whom she favored over Andrew due to her succeeding in meeting Mona's high standards) break the pinata. Finally seeing his wife for the dangerously psychotic person she was, Don set up an accident to kill Mona by tampering with the garage light and setting up a gas leak. Don then asked Mona to go to the garage to more ground beef for the barbeque, with the faulty light setting off an explosion that killed Mona. 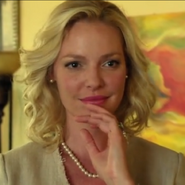 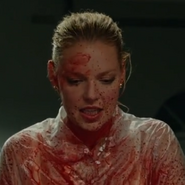 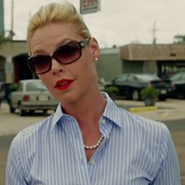 Add a photo to this gallery
Retrieved from "https://femalevillains.fandom.com/wiki/Mona_Champagne_(Home_Sweet_Hell)?oldid=169788"
Community content is available under CC-BY-SA unless otherwise noted.