Mona is the girlfriend of the gang leader Zorbek, who aims to steal the German gold reserve treasury.  Mona has several cat fight scenes with the blonde good girl Leah Diehl (Eva Habermann).   Leah has the last laugh.  Leah is piloting a large plane about to take off on a runway.  However, instead of taking off, she takes the time to attempt to run down the car that Leah is riding in, in front of the plane.  Mona can be seen enjoying the fact that Leah is about to be crushed by the plane.  At the last minute, Leah's partner is able to drop objects onto the planes engines, causing explosions that spread throughout the plane.  Mona has the shock of impending doom on her face, as she realizes that her plane is about to explode. The last we see of her is a fiery flash in the cockpit of the plane, followed by the entire plane exploding. 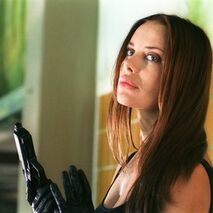 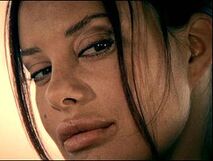 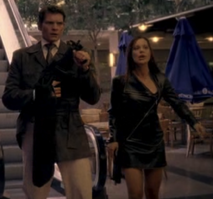 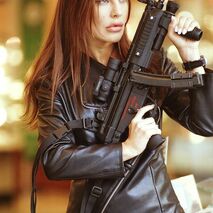 Greedy Mona wants all the gold for herself

Angry that Leah is challenging her

And orders the pilot to ram her

And laughs evilly at the thought of running her over

The evil Mona is shocked to see her demise coming

Add a photo to this gallery
Retrieved from "https://femalevillains.fandom.com/wiki/Mona_(Der_Clown)?oldid=145271"
Community content is available under CC-BY-SA unless otherwise noted.