Mistress K is an owner of a brothel somewhere in Mexico. She appears in Fansadox Collection 199 - Weird Brothel by - Steven Lucas. Behind in the VIP area she runs a white slavery ring selling them to those that seek special services.

After a American couple sought out her services, Mistress K showed them her collection of young women she kidnapped from both Europe and the States. Since they are recent acquisitions and not fully trained as slaves, she allows them to rent one for 24 hours. After trying one of the slaves out, the couple decide to buy a former art student from her as a slave. 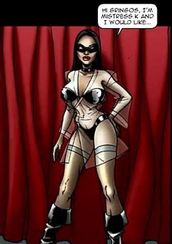 Mistress K2.png
Add a photo to this gallery
Retrieved from "https://femalevillains.fandom.com/wiki/Mistress_K_(Weird_Brothel)?oldid=54610"
Community content is available under CC-BY-SA unless otherwise noted.