Miss Morticia (Musetta Vander) is a minor villainess in the 2006 straight to video "Monster Night".

In the film, the Ackerman family have moved to Los Angeles, and taken up residence in a spooky old house. It follows the oldest son Isaac, who attends Zombini High School. The Dean is evil and is searching for immortality. In order to accomplish this, he needs to gather the thirteen souls of the zodiac, which is tied to the 29th of February. This also happens to be Isaac's birthday.

On Halloween, Isaac is forced to babysit his younger siblings, and his new friends from school arrive and turn his house into a party. Isaac's five year old brother Vincent, who is dressed like Hugh Heffner, goes missing. It is up to Isaac and his friends to try to find them.

After entering a secret passage in the house, they find that the house is haunted. His school teachers are there for some reason, and attempt to help them. 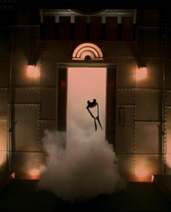 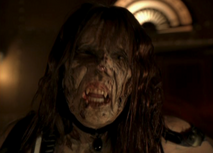 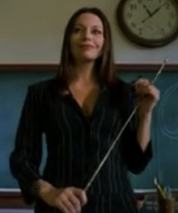 Add a photo to this gallery
Retrieved from "https://femalevillains.fandom.com/wiki/Miss_Morticia_(Monster_Night)?oldid=194308"
Community content is available under CC-BY-SA unless otherwise noted.