Miss Lippenrieder is one of the four statuesque assistants who also serve as bodyguards and henchwomen for Loveless in the 1999 movie "Wild Wild West". She is played by the Swedish born actress, Sofia Eng.

Miss Lippenrieder appears to be the intelligence advisor since she can read lips from many yards away with the use of her telescope and opera glasses. The other henchwomen are Amazonia (Frederique van der Wal) the muscle and tactical advisor of the group; Munitia (Musetta Vander) the weapons expert; and Miss East (Bai Ling) who only appears early on to seduce Jim West (Will Smith). The four sport incredibly sexy outfits throughout the movie which show off their figures.

She first appears along with her boss, Dr. Arliss Loveless (Kennth Branagh) and the other three mistresses in a saloon. They are there awaiting Mr. Hudson (Rodney A. Grant) and Gen. Bloodbath McGrath (Ted Levine) who are delivering cases of nitroglycerin and a kidnapped scientist named Professor Escobar. However, two officers named Artemus Gordon (Kevin Kline) and James T. West (Will Smith) intervene while attempting to detain McGrath (to no avail). This forces Loveless and his men to ditch the scene, but not before they destroy the nitroglycerin supply to cover their escape.

Assigned by President Grant to work together, Gordon and West track down McGrath's current location in New Orleans, where Loveless is hosting up a costume party for the elite of Southern society. Following the death of the Miss East, Miss Lippenreider and the other ladies oversee the unveiling of Loveless' new weapon. This weapon is a steam-powered tank, which Mr. Hudson uses to massacre all of McGrath's soldiers before Loveless kills McGrath himself.

After Munitia and Amazonia ditch the dying McGrath into the water, Miss Lippenrieder helps round up the tank into Loveless' train and manages to capture Gordon, West and Professor Escobar's wife Rita (Salma Hayek) by firing a giant grappling hook (fired by Munitia) onto their train The Wanderer.

Loveless' train ends up being destroyed after West kills Mr. Hudson. Loveless and his mistresses leave Gordon and West to die, and take Professor Escobar's wife Rita and the train conductor Mr. Coleman (M. Emmet Walsh) hostage as they head back to their laboratory in Spider Canyon to finalize their plan.

Eventually, after three days, Gordon and West manage to find Spider Canyon, only to learn that Loveless has built a 80-foot mechanical tarantula. Loveless managed to rid his giant spider at Promotroy Point, where he captures President Grant and Gordon with a net. West attempts to stop this by climbing into the spider, but Munitia notices West's presence and shoots him in the chest, seemingly killing him as he falls to his apparent demise off the cockpit of the spider.

Following Loveless' return back to Spider Canyon, he announces his true plan to force President Grant to divide the states among Great Britain, France, Spain, Mexico, and himself. Loveless demands that President Grant sign the surrender papers, but the latter refuses. Loveless orders Munitia to execute Gordon, but she is interrupted by a belly dancer, who turns out to be West in disguise as he escaped death with a concealed layer of chain mail in his jacket (another one of Gordon's inventions) stopped the bullet. West uses an exotic dance to distract Loveless while managing to free Gordon, Rita and the kidnapped scientists. However, Amazonia knocks out the President and she along with Miss Lippenreider drag him and they leave along with Loveless and Munitia. They intend to use his giant spider to decimate the narby town in order to goad Grant into signing the surrender.

As Munitia holds the President at gunpoint, she and the others are astounded to see that Gordon and West have built a flying machine to catch up to them. Though Amazonia manages to take down the flying machine with bullets, Gordon and West maneuver their vehicle to crash onto the spider's cockpit, resulting in a screaming Munitia to be pushed over the side rail to her death, much to Loveless' complete shock.

Despite this, Loveless continues on with his rampage, though he and his remaining mistresses would later meet Munitia's fate by falling from the spider to their deaths after fighting against Grant and the officers. Miss Lippenrieder is defeated by President U.S. Grant (Kevin Kline) who sends her over the side rail of the giant mechanical spider. As a result Miss Lippenrieder plummets to her death. We catch a brief glimpse as she goes over the side, but nothing is shown of her body as it lands or later. 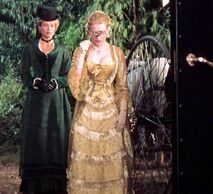 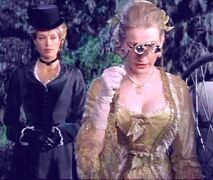 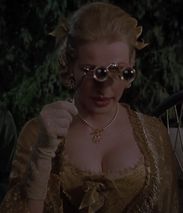 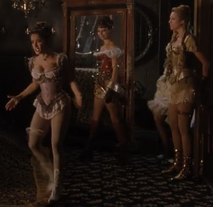 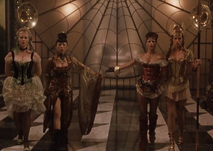 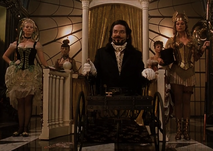 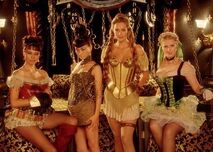 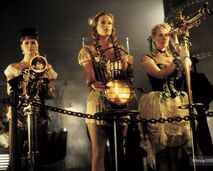 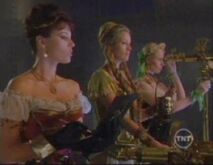 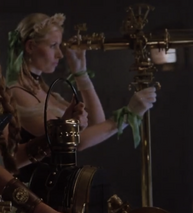 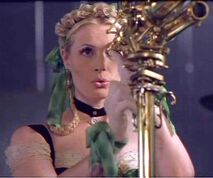 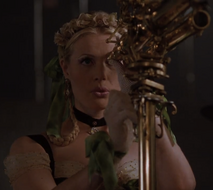 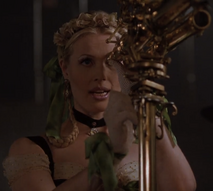 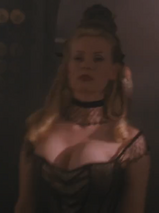 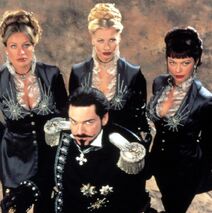 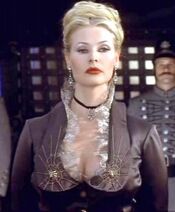 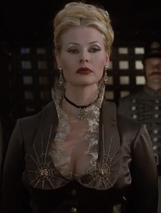 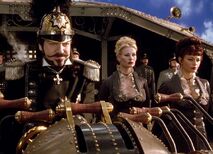 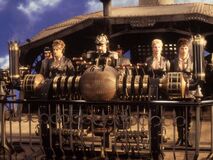 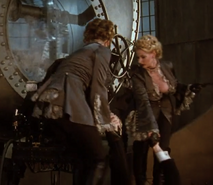 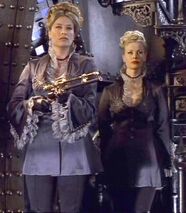 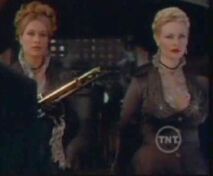 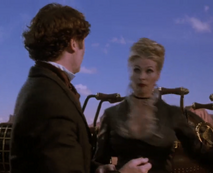 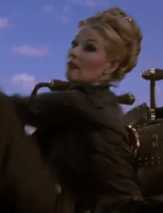 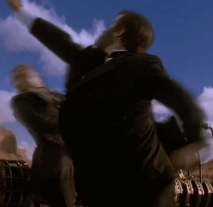 Miss Lippenrieder on the train departing
Add a photo to this gallery
Retrieved from "https://femalevillains.fandom.com/wiki/Miss_Lippenrieder_(Wild_Wild_West)?oldid=194292"
Community content is available under CC-BY-SA unless otherwise noted.