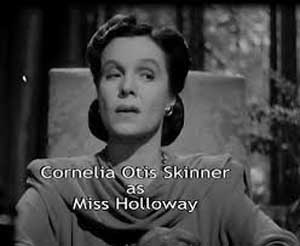 Miss Holloway (Cornelia Otis Skinner) is the only one who knows the secret of the haunting of a house on the Cornwall coast bought by a composer (Ray Milland) and his sister (Ruth Hussey). Except for a mysterious young woman, Stella (Gail Russell), everybody else is long dead and can tell no tales. Stella worships the memory of her mother, Mary Meredith, the former owner of the house and even feels her presence, even if the girl was only three years old when her mother fell off the cliff to her death. Accident? Murder? Possession?

The menacing Miss Holloway was the live-in nurse at that time, and has since established a sanitarium for women only that she has named The Mary Meredith Retreat. It is clear that Miss Holloway idolized Mary and there are hints that they were lesbian lovers. (A similar hinted relationship was in REBECCA, between Mrs. Danvers and the first Mrs. DeWinter.)

The twisting plot reveals that Miss Holloway is guilty of murder... no, not of Mary, whom she idolized...but related, and even sends the daughter Stella to what she is sure will be another fatal plunge over the cliff.

The movie also introduced the popular song "Stella By Starlight".

Retrieved from "https://femalevillains.fandom.com/wiki/Miss_Holloway_(The_Uninvited)?oldid=28187"
Community content is available under CC-BY-SA unless otherwise noted.