Start a Wiki
watch 01:51
The Loop (TV)
Do you like this video?
Miss Hogge was the villainess in the 1948 episode "The Pearls of Patmos" for the comic book, Jungle Adventure, which was the precursor to Rulah, Jungle Goddess.

Miss Hogge is a treacherous thief who crosses the jungle in search of treasures.

In the episode, Rulah has befriended Circo, a powerful queen of a primitive but wealthy hidden society.

Meanwhile, we see Miss Hogge who is traveling on a safari with her partner Manse.  Manse has told Miss Hogge that there is a Temple of Pearls.  She plans to steal the pearls and become the richest woman in the world.

When Manse is attacked by a python, Miss Hogge does not come to his aid.  Instead, she figures this is her chance to keep both shares for herself.

Miss Hogge then comes across the village with the Temple of Pearls.  She greets Circo, and claims she comes in peace.  Circo is cautious, but takes her in.

Later at night, Miss Hogge sneaks off, and is followed by Rulah.  She ends up at the entrance of the forbidden temple, where she meets a guard and her two lions protecting the gate.  Miss Hogge uses meet from the previous meal laced with poison to knock off the lions.  She then pulls out a pistol and kills the female guard.

Rulah entered the temple in pursuit of Miss Hogge, but was attacked.  The two females engaged in a catfight, of which Miss Hogge pistol whipped Rulah.  She then stripped Rulah and exchanged clothing with her.

After Miss Hogge figured the pearls that make up the temple were made of cultured pearls, she became angered.  These were not worth as much as she was led to believe.

Circo arrived and found Rulah knocked out.  Miss Hogge explained to the queen that she saw Rulah trying to steal the sacred pearls.

Rulah came to and attacked the blonde thief.  Miss Hogge drew her pistol and told her "Before I leave I'm going to have the pleasure of killing you, Rulah".  However, Miss Hogge lost her balance after slipping on some pearls.  Rulah was able to thrust her knife into her chest, killing her. 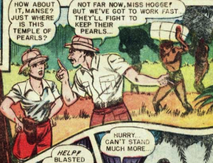 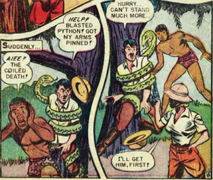 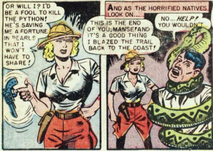 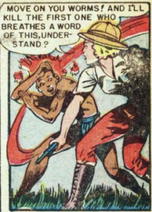 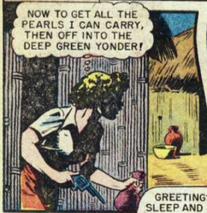 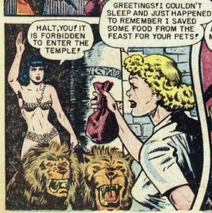 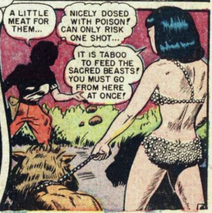 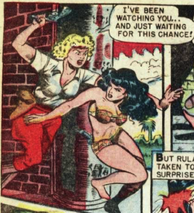 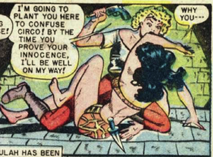 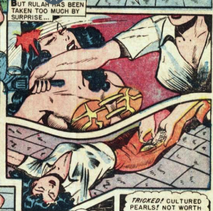 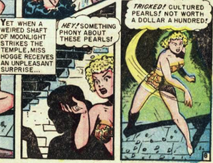 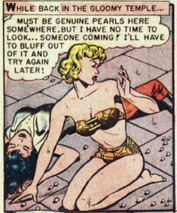 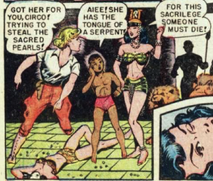 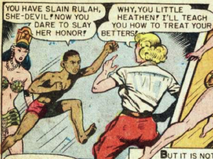 Add a photo to this gallery
Retrieved from "https://femalevillains.fandom.com/wiki/Miss_Hogge_(Jungle_Adventure)?oldid=155836"
Community content is available under CC-BY-SA unless otherwise noted.