Mr Lucky - I bet your life

To kill Mr Lucky for her criminal employers

Disarmed of her gun by a

Villainess Miss Grey (no given first name) is a female assassin.

A gambling acquaintance of Mr Lucky (John Vivyan) called Mike Haley (RG Armstrong) has taken out a deadly bet with a crime organization. If the organization manages to murder Mr Lucky, Haley must pay them $10,000. But for every day Lucky remains alive they pay Haley $1,000. Haley is sure Mr Lucky's famous luck will keep him alive long enough for him to make a small fortune out of the bet. A number of failed murder attempts are made by the crime organization. Using his underworld contacts Lucky discovers that Haley has set him up, but after confronting the gambler, Haley tells him he now can't call off the bet and assassination attempts even if he wanted to. Further, he doesn't actually know the identity of the assassin.

Working undercover for the crime organization, Miss Grey makes various attempts on Lucky's life. When her long range rifle bullets fail to kill their target, she strikes up a personal relationship with Lucky and tries unsuccessfully to kill him with gas in her apartment. Another failed attempt occurs when she just misses Lucky and Andamo in a street at night with a large lump of concrete she pushes down from a building above them. She finally plants explosives aboard Lucky's ship, the Fortuna II.

A very glamourous and beautiful Caucasian blonde in her 30s .

After an explosion rigged by Miss Grey goes off aboard the Fortuna II, Lucky and the police pretend he has really been killed by it. Miss Grey goes to see Mike Haley to collect the $10,000 he owes. But Haley is broke and can't pay. Unwilling to give him any time to try to come up with the money, Miss Grey pulls a revolver and prepares to shoot Haley as an example to others who might consider welching on a bet - but just before she can fire Lucky, Andamo, and Lt Rovacs burst into the room - the latter shoots the gun out of Miss Grey's hand. She is arrested along with Haley. 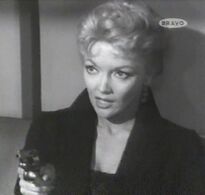 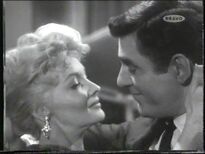 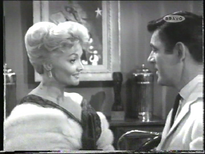 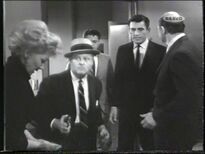