Miss Goodthighs is a minor villainess from The Simpsons. She appears in the Season 8 episode You Only Move Twice.

She works at Globex, a technology company owned by supervillain Hank Scorpio.

She first appears in a car trying to offer Waylon Smithers a job at Globex, he declines so she offers the role to Homer Simpson instead. Later in the episode she informs her boss Hank Scorpio that there is a conference call with the United Nations waiting for him, a call in which Scorpio reveals that he and Globex are in fact an evil corporation by threatening the United Nations with his doomsday device.

She is lastly seen showing off another side of her job role as an evil henchwoman of Scorpio's. The military have invaded Globex with the intention of stopping Scorpio, Miss Goodthighs appears wearing a bikini and high heels and helps fight the military. She jumps onto a solider, knocking him to the ground, and then murders him by breaking his neck between her legs. She is not seen again after that and her fate is unknown. 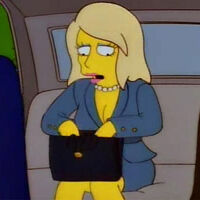 In the car, recruiting new staff for Globex

Miss Goodthighs in the office

Taking down a soldier

Using her lethal legs to kill the solider

Miss Goodthighs in The Simpsons: Tapped Out video game
Add a photo to this gallery
Retrieved from "https://femalevillains.fandom.com/wiki/Miss_Goodthighs_(The_Simpsons)?oldid=187331"
Community content is available under CC-BY-SA unless otherwise noted.