Miss Dazzle was a magican's assistant to The Sorcerer (Michael Constantine), who was the main villainess.  In the first two 15 minute segment entitled, "The Sorcerer's Golden Trick", the Sorcerer escapes from a maximum security prison and plans to take his revenge on Electra Woman (Deidre Hall) and Dyna Girl (Judy Strangis), the heroines of the entire series.  This was the first episode in the series.  In the series, the girls work in their off-time as reporters for Newsmaker Magazine.

The Sorcerer teams up with Miss Dazzle, where the duo plan to steal all the gold in Fort Knox by using a box housing a powerful mirror trick.  Miss Dazzle is dressed in a magician's assistant outfit that consists of a pink and silver corset with thin shoulder straps.  Covering her legs are shear see through silk leggings over her pink stockings and high heel shoes.  She has pink opera gloves, and her blonde hair is tied up in a bee-hive hairdo with pink and silver ostrich feathers intertwined.

The Sorcerer first arrives as the county museum where he steals a golden puppy statue.  When the Superheroines arrive, he disappears while climbing a rope leading up to thin air.  Back at the hideout, Miss Dazzle is entranced with the golden statue.  She makes a comment that she didn't know The Sorcerer was an art collector.  The Sorcerer, responds that it was just a decoy.  This confuses her even more, as she comments that she though it was a golden dog.  The Sorcerer is annoyed with this, and tells Miss Dazzle to remind him to conjur up some brains for her some time.  In actuality, he plans to use the statue to lure the heroines into a trap.

Electra Woman and Dyna girl arrive at the Sorcerer's hideout, and while approaching the statue, are transported onto a stage where the Sorcerer and Miss Dazzle are members of an audience.  Suddenly, the dynamic duo are trapped in a cage with a man eating tiger but without the power of their Electras-comps.  They escape the cage by getting on top of each others shoulder and escaping from the top.

Meanwhile, the Sorcerer heads for Fort Knox to steal the gold.  After captivating the attention of the guard with a mini disco ball, they are able to enter the vault.  When Electra Woman and Dyna Girl arrive, the Sorcerer uses a storm inside the vault to keep them magnetically attached to the side rail.  He then uses a mirror trick inside the vault to make all the gold disappear.  Before they can get away, the superheroines foil their plan again.  This time, the Sorcerer attempts to use a mini disco ball to put them in a trance.  However, Electra Woman reverses the ball and it goes back to Miss Dazzle and the Sorcerer and puts them in a trance instead.

Then Electra Woman figures out that the gold didn't really disappear, and that the mirror box was transmitting a force that was hiding it in plain sight.

The next scene we see The Sorcerer and Miss Dazzle captured in large boxes with only their heads sticking out of the top.  Electra Woman tells them that they will soon be in their own prison cell.  Then she used her wrist gadget to zap the boxes and make them disappear, which she called her greatest magic trick. 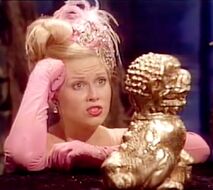 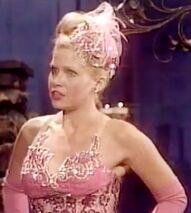 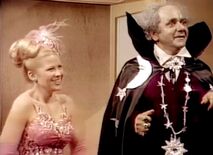 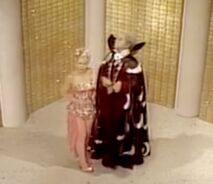 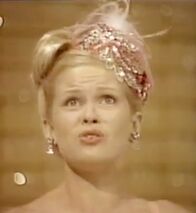 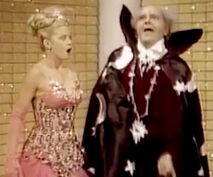 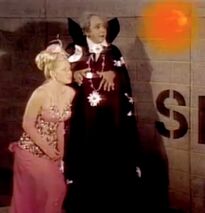 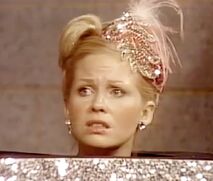 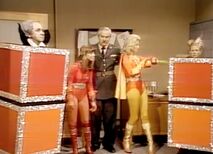 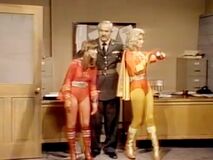 Miss Dazzle and The Sorcerer once again teamed up in a second two part segment entitled "Return of the Sorcerer", which was Episode 9 and 10 of the series.

In this episode, The Sorcerer and the lovely Miss Dazzle, appear on the scene at an exhibit at The Municipal Records Building and steal Merlin's mythological mirror.  This is done right in front of a crowd of spectators.  Meanwhile, across town at the home of Lori and Judy (Electra Woman and Dyna Girl's real identities), where they are inspecting a priceless clock for Newsmaker Magazine.  The clock disappears right in front of their eyes, and they descend down to Electrabase as their superhero costumes to confer with Frank Heflin (Norman Alden).  Frank has determined that a space-time continuum disturbance was the cause of the missing clock.  The Sorcerer appears on the viewscreen with the missing clock and challenges the superheroines to figure out how he did it.  He also tells them that his next trick will be to steal the Crown Jewels in London.

While the heroines race to the Municipal Records Building, back at the hideout, the Sorcerer disappears through Merlin's Mirror.  As Electra Woman and Dyna Girl arrive at the exhibit, the crown jewels disappear, leaving the heroines perplexed.  They are left with a note stating that a trick like that deserves a "big hand".  As they try to decipher the meaning of the message, two big hands appear overhead and start clapping loudly, weakening the girls by nearly deafening them.  With the help of Frank, they locate the emitter and shut it off.

They then locate the Sorcerer's hideout, which is hidden by an illusion in the middle of a giant field.  When they reach the Sorcerer, he is finally ready to reveal the secret of how he has completed the robberies.  He then goes through the mirror into another dimension, a dimension that allows him to travel through time.

Electra Woman and Dyna Girl give chase to the Sorcerer through the mirror, over the objections of Frank who says that he can't guarantee their safety.  Miss Dazzle is left holding down the fort at the hideout and can be seen looking into the portal opening wondering what it would be like to enter.

Once inside the strange dimension, Electra Woman and Dyna Girl discover that their Electa-comps do not work.  Frank discovers through the Crimescope that the girls have ceased to exist.  The Sorcerer manages to lose the girls inside the strange dimension and exits back through the mirror and closed up the exit, leaving the heroines trapped.  The Sorcerer than breaks into the communication line, and gloats in his recent triumph to Frank.

The Sorcerer than decides to go on another crime spree by re-entering the mirror.  This time he heads back to 1502 to the studio of Leonardo da Vinci (Billy Beck).  The girls follow him, and watch him take off with the Mona Lisa.

Finally, Miss Dazzle has had enough of everyone else having fun with the time travel, and she steps through the mirror to see what it is like in the other dimension.  However, right when she entered, the Sorcerer arrived with the painting.  The ladies arrive immediately afterwards and zap the painting from him.  The Sorcerer and Miss Dazzle head back through the mirror and hide the entrance portal.

The Sorcerer takes this time to trap his tormentors by spinning the mirror, resulting in a violent storm around the ladies.  They regain their bearings and again approach the mirror.  He is then forced to break the mirror, trapping Electra Woman and Dyna Girl in the mirror dimension forever.

Frank attempts to use Crimescope to break through the time barrier, and is successful.  Back at the Sorcerer's hideout, the villains are busy celebrating his apparent victory over the girls.  However, the victory is short lived as they appear at the hideout.  Once again, the Sorcerer and Miss Dazzle attempt to escape.  This time Dyna Girl shouts out "Please Miss Dazzle, don't leave on my account".  With this, Dyna takes out her wrist gadget and shoots an Electra G beam at Miss Dazzle, while Electra Woman shoots a beam at the Sorcerer.  The beam makes the Sorcerer melt into the floor leaving only his cape behind.  Miss Dazzle is left staring at the floor with the two superheroines surrounding her.  The Sorcerer hasn't gone, he has just been sent into the mirror dimension where he is trapped.  Miss Dazzle makes the comment, "I told him that would mean seven years bad luck".  This is the end of the episode, but it is quite clear that Miss Dazzle will soon be taken to prison for her bad deeds. 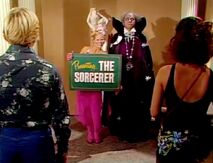 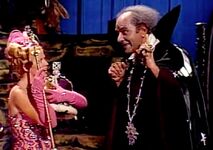 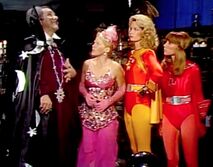 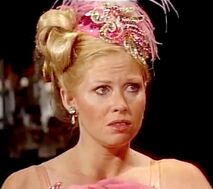 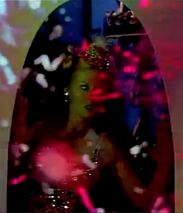 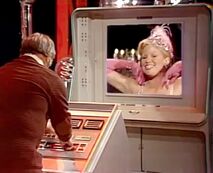 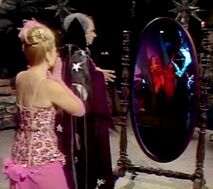 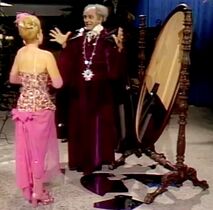 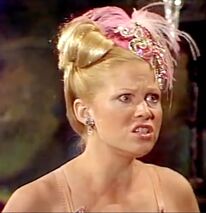 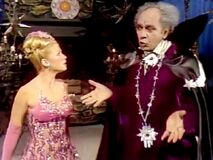 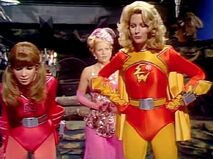 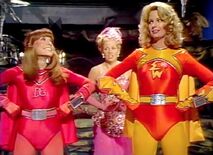 Add a photo to this gallery
Retrieved from "https://femalevillains.fandom.com/wiki/Miss_Dazzle_(Electra_Woman_and_Dyna_Girl)?oldid=202226"
Community content is available under CC-BY-SA unless otherwise noted.