Miss Clean (Monique van Vooren) is the henchwoman and girlfriend in the 1968 episode "Penguin's Clean Sweep" for the TV series "Batman".

Miss Clean is the moll and one of the three henchmen for The Penguin (Burgess Meredith).  In the episode, Penguin is first seen breaking into the U.S. Mint in attempt to steal a gift for his moll.

At the police Headquarters, Batman (Adam West) and Robin (Burt Ward) bump into the Penguin and Miss Clean in the elevator.  They escort them into Commissioner Gordon's (Neil Hamilton) office, but it turns out that Penguin didn't steal anything from the mint.  Penguin threatens to sue the police for false arrest but Batman points out that he still broke into the mint.  Batman offers to drop the criminal charges if he drops the suit.

Later Batgirl figures out by driving by the Mint, that Penguin didn't steal anything, but did gass the mint staff.  In careful tests, they discover that Penguin and his goons actually tainted the ink at the U.S. Mint with Lygerian Sleeping Sickness.  He does this by using his collection of Lygerian fruit flies.

As word of the infected money gets out, citizens of Gotham City empty their cash right onto the streets.  As a result, we see Miss Clean and The Penguin come through with giant vacuums gathering up all the paper money.  Batgirl attempts to stop them, but she is gassed for her trouble.

When Bruce Wayne (Adam West) spreads the word of the infected bills worldwide, the Penguin realizes his ill-gotten gain is worthless and threatens a more devilish plot of realeasing 500 Lygerian fruit flies if the warning is not retracted.

Bruce refuses, and the fruit flies are released.  When Batman, Robin, Batgirl, Gordon, and O'Hara wait for Penguin at the Gotham National Bank.  They pretend to be struck with sleeping sickness.  However, it turns out that it's cold enough in Gotham for the flies to go into hibernation.  A fight ensues, and Penguin is defeated and they are taken to prison.

Miss Clean is very fearful of physical contact and we see her running away during the fight scenes.  She wears a sparkly silver long-sleave top with a purple bowtie.  In addition she has a white miniskirt with a purple belt and her hands are covered with white gloves.  Her long legs have wite stockings on them, and she has purple boots that are white at the bottom.  Miss Clean's blonde hair is styled big and the front portion is tied back with a purple bow. 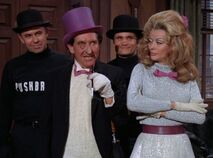 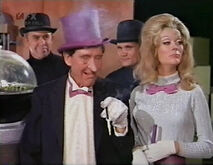 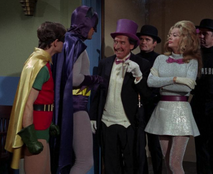 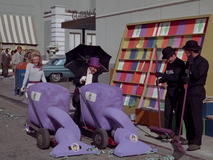 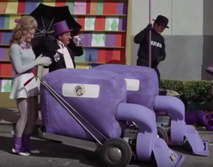 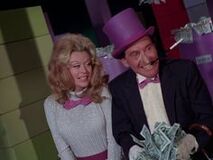 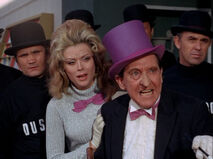 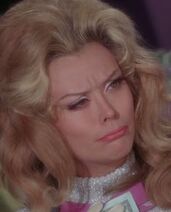 Cheering for the bad guys during the fight
Add a photo to this gallery
Retrieved from "https://femalevillains.fandom.com/wiki/Miss_Clean_(Batman)?oldid=217910"
Community content is available under CC-BY-SA unless otherwise noted.