Start a Wiki
watch 01:51
The Loop (TV)
Do you like this video?
Mirza, Mulher Vampiro is a vampire that appeared in the 1967-1968 Brazilian comic book series by Editora Jotaesse.

Mirza was born as Mirela Zamanova in a castle in Krakow, Poland.  She was the seventh daughter of Duke Zamanov.  Local belief dictated that seven daughters without a male between them foretold a curse on the family.  The first result of this curse, was the death of Mirela's mother giving birth to Mirela.  The second curse was Waleska, the first born, who blamed Mirela for her mother's death.  She died in a fire in her mother's sepulchre which was started by candles she had lit.  Olga, the most fragile, died in serenity of tuberculosis.  Tatiana and Ivana drowned in a little river while searching for flowers.

Disturbed by these disasters, the heartbroken Duke turned to drinking while his business went bankrupt.  He moved the family into the debt bo Count Boris Silvenski, a money-lender, and an elderly man who was desperately in love with Mirela.

Tamara, one of the last surviving sisters, married, and fled, never to return.  Samara, the last of Mirela's sisters, sought to do the same, planning to leave with Tristao, her lover.  However, Tristao attempted to rape Mirela.  Mirela's anger and disgust activated the curse, and Mirela became a vampire.  Tristao became her first victim, and Samara, who had witnessed everything and had to be silenced, became Mirela's secon.

The loss of yet more of his daughters was the final straw for the Duke, as he committed suicide.  After her father's suicide, Mirela felt obliged to marry Boris.  However, she killed him on their honeymoon, leaving everyone to believe that the consumation of the marriage had been too much for one of his advanced age.

Mirela Zamanove became Mirza, and vowed to try and escape from the curse.  She left her homeland of Poland.  She lived as a top model and member of high society in Brazil and around the world.  She spent her time seducing and drinking the blood of men, women, and whoever crossed her path.

Mirza had a butler named Brooks, who was a hunchback and loyal follower, admirer and accomplice. 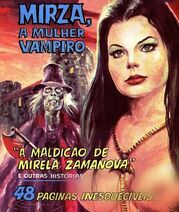 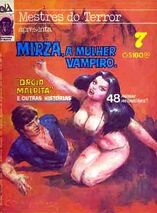 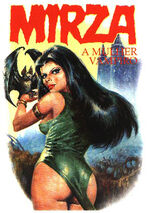 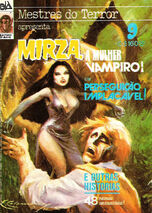 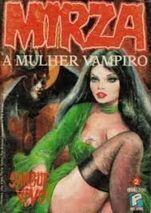 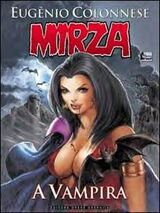 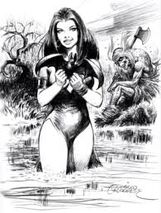 Add a photo to this gallery
Retrieved from "https://femalevillains.fandom.com/wiki/Mirza,_Mulher_Vampiro_(Jotaesse)?oldid=173038"
Community content is available under CC-BY-SA unless otherwise noted.