Start a Wiki
watch 01:48
The Loop (TV)
Do you like this video?
Miriam (Lesley-Anne Down) is a secondary antagonist in the 1978 British heist crime film "The First Great Train Robbery".  When the film was released in the United States it was known as "The Great Train Robbery".

Miriam is the mistress of Edward Pierce (Sean Connery), a charismatic member of London's high society, and a secret master thief.  Pierce plans on stealing a monthly shipment of gold from London to Folkestone train in 1855 that is meant as payment for British troops fighting in the Crimean War.

In order to pull off the heist, they need to obtain four keys for the two safes.  Pierce recruits Robert Agar (Donald Sutherland, a pickpocket and screwsman.  In addition, they bribe Burgess, a train guard.

Pierce targets Henry Fowler (Malcolm Terris), the bank manager.  Knowing that Fowler has a weakness for prostitutes, Miriam reluctantly poses as "Madame Lucienne", a high-class courtesan in an exclusive bordello.  Miriam meets with Fowler and asks him to undress, forcing him to remove the key worn round his neck. While Fowler is distracted by Miriam, Agar makes an impression of his key. Pierce then stages a phony police raid to rescue Miriam, forcing Fowler to flee to avoid a scandal.

The teams snakeman, Clean Willy (Wayne Sleep) is subsequently arrested after being caught pick-pocketing and informs on Pierce. The police use Willy to lure Pierce into a trap, but the master cracksman easily eludes capture. Clean Willy escapes from his captors, but is murdered by Barlow on Pierce's orders. The authorities, now aware that the robbery is imminent, increase security by having the baggage car padlocked from the outside until the train arrives at its destination and forbidding passengers to travel in the guard's van. Any container large enough to hold a man must be opened and inspected before it is loaded on the train.

Pierce smuggles Agar into the baggage car disguised as a corpse in a coffin.  Miriam faints in order to conceal the body. Pierce plans to reach the car across the coach roofs while the train is under way, but he and Miriam encounter Fowler, who is riding the train to Folkestone to watch over the shipment. After arranging for Miriam to travel in the same compartment as Fowler to divert his attention, Pierce crosses the roof of the train and unlocks the baggage van's door from the outside. He and Agar replace the gold with lead bars and toss the bags of gold off the train at a prearranged point. However, soot from the engine's smoke has stained Pierce's skin and clothes and he is forced to borrow Agar's suit, which is much too small for him. The jacket splits across the back when he disembarks at Folkstone. The police quickly become suspicious and arrest him before he can rejoin his accomplices.

Pierce is put on trial for the robbery. As he exits the courthouse, he receives the adulation of the crowds, who consider him a folk hero for his daring act. In the commotion, a disguised Miriam kisses him full on the mouth, in the process slipping a key to his handcuffs from her mouth to his. Agar is also present, disguised as a police van driver. As Pierce is about to be put into the wagon, he frees himself and he and Agar escape, to the jubilation of the crowd and the chagrin of the police. 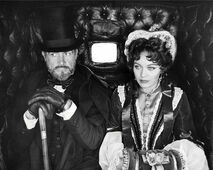 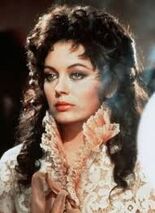 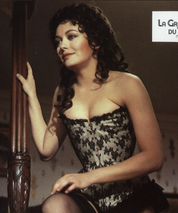 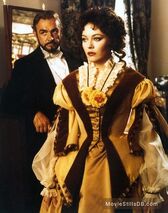 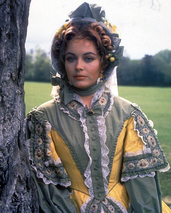 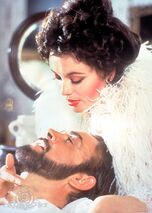 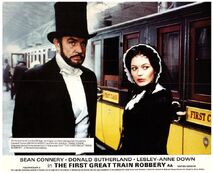 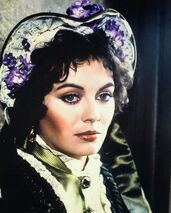 Add a photo to this gallery
Retrieved from "https://femalevillains.fandom.com/wiki/Miriam_(The_First_Great_Train_Robbery)?oldid=192596"
Community content is available under CC-BY-SA unless otherwise noted.