Miranda Wilson was a film actress and the love interest of Mysterio in Spider-Man: The Animated Series. She is voiced by Beverly Garland.

She was nearly killed in an accident involving her movie. She had fallen off of the George Washington Bridge during an action scene and her face had been badly scarred.

She ran through the sewers until she came across catacombs under her studio, which was where Mysterio's headquarters were. Mysterio connected her to his machinery, where he rebuilt her as part cyborg.

Mysterio started stealing for her benefit, while she kidnapped Mary Jane Watson because she wanted to put her mind into Mary Jane's body.

When Spider-Man and Mysterio arrived to save Mary Jane, Mysterio revealed the machine was a fake that he'd created to give her hope and could not actually switch their minds.

When Miranda set off a self-destruct button, Mysterio chose to stay with her revealing that they truly loved one another. She seemingly died in the explosion along with Mysterio. 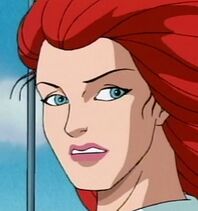 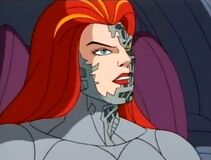 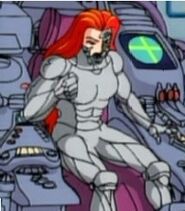 Add a photo to this gallery
Retrieved from "https://femalevillains.fandom.com/wiki/Miranda_Wilson_(Spider-Man:_The_Animated_Series)?oldid=183126"
Community content is available under CC-BY-SA unless otherwise noted.