Start a Wiki
watch 01:50
The Loop (TV)
Do you like this video?
Miranda (Amanda Donohoe) Was the main Villainess in 90s comedy 'Liar Liar'. She is first introduced as Fletcher's immediate boss who prefers to have lawyers that will lie their way to winning even when it means that guilty criminals walk free. Miranda hands the Cole case over to Fletcher given his high reputation, and becomes interested in him after witnessing his skills as a compulsive liar. Once commending Fletchers work she forces herself onto him, causing him to miss his sons birthday he had promised to be at. Letting his son down once again leads to Max making a birthday wish to stop Fletcher from able to lie for a whole day.

As they wake up together Miranda become the first victim of Fletchers harsh words of complete truth when he comically tells her that hes had better sex which quickly sours her interest and throws him out of the room whilst still in her underskirt. Later on during Fletchers breakdown in his office Miranda eavesdrop on him whilst he addresses that he is weirdly unable to lie. Seeing this as an opportunity for revenge the evil scheming lawyer sets Fletcher up to ruin his career when she brings him in the room where a meeting is taking place with the high ranking lawyer Mr Allen as well as other employees that Fletcher hates. Miranda tells Mr Allen that Fletcher would like say what he thinks of him, after a long stream of insults Mr Allen cracks up laughing which then goes onto becoming a huge roasting of everybody in the room much to the hilariousness of Fletchers comments. Whilst in the peak of the hysterical laughter in the room Fletcher rebounds and gets another one up on Miranda by yelling 'Slut' down her ear as the room roars with even more laughter leaving the villainess stood there humiliated and not knowing what to do.

Miranda is last seen during the court hearing with high assumption Fletcher would mess up and lose however he once again rebounds and turns the case round without having to lie. With another one up over her this is the last she is seen as Fletcher then leaves work to go and see finally see his son Max. 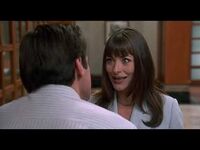 (Testing his complete inability to lie before to send him to his execution stake) "Tell me, what do you think of him?"

(Very pleased with the result, which is him insulting his employer) "Really? How delightful."

(Ordering him on a very feminine tone to follow her right into the humiliating trap she has set for him) "This way ..."

Add a photo to this gallery
Retrieved from "https://femalevillains.fandom.com/wiki/Miranda_(Liar_Liar)?oldid=206473"
Community content is available under CC-BY-SA unless otherwise noted.