A Kree sniper and member of Starforce. Gemma Chan explained that Minn-Erva was "the star of Starforce" before Danvers joined the team and is "slightly threatened by someone else who has come in and is also very talented."

In 1996, on the Kree Empire's capital planet of Hala, Starforce member Carol_Danvers suffers from amnesia and recurring nightmares involving an older woman. Yon-Rogg, her mentor and commander, trains her to control her abilities while the Supreme Intelligence, the artificial intelligence that rules the Kree, urges her to keep her emotions in check.

During a mission to rescue an undercover operative infiltrating a group of Skrulls, alien shapeshifters with whom the Kree are at war, Vers is captured by Skrull commander Talos, taken aboard their Earth-bound vessel, and subjected to a memory probe. Vers escapes and crashlands in Los Angeles. Her presence attracts S.H.I.E.L.D. agents Nick Fury and Phil Coulson, whose investigation is interrupted by a Skrull attack. In the ensuing chase, Vers recovers a crystal containing her extracted memories while Fury kills a Skrull impersonating Coulson. Talos, disguised as S.H.I.E.L.D. director Keller, orders Fury to work with Vers and keep tabs on her. 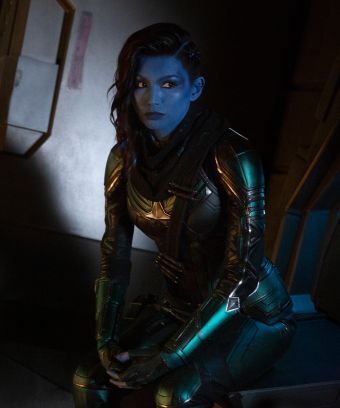 Danvers, Talos, Fury and Rambeau locate Lawson's cloaked laboratory orbiting Earth, where Lawson hid several Skrulls including Talos' family, and the Tesseract, the power source of the energy-core. Danvers is captured by Starforce and interfaces with the Supreme Intelligence. During their conversation, Danvers removes the Kree implant that was suppressing her powers, allowing her to reach her full potential. In the subsequent catfight, Danvers blasts Minn - Erva away. Minn - Erva survives and attempts to destroy Maria Rambeau's jet. However, she gasps in shock at her impending doom as Rambeau routs her.

Retrieved from "https://femalevillains.fandom.com/wiki/Minn-Erva_(Captain_Marvel)?oldid=169763"
Community content is available under CC-BY-SA unless otherwise noted.