Millie, aka Ushkar (Candace Cameron Bure) is the main villainess from "The Witches of Pennbrook," episode 5.05 of Boy Meets World (airdate October 31, 1997).

Millie was Jack's new girlfriend in the episode, but she quickly makes a bad impression on Eric, as she monopolizes Jack's time and is shown to be very manipulative. It is later revealed that Millie is an evil Satanic witch, and Eric catches her calling out to Satan. To cover her tracks, Millie slaps Eric and deceptively tells Jack that Eric was hitting on her.

Millie reveals her true evil side to Jack in the episode's climax, when she reveals herself as Ushkar, Daughter of Evil. She then ties up both Jack and Shawn as part of a demonic sacrifice that would deliver immortality to her and her coven, stating that a Hunter was needed for the ritual, and that two is even sweeter. At that moment, Eric appears with intent to stop Millie's evil plans, only for a luminous beam (intended for Jack and Shawn) to strike him. Millie is surprised that Eric survived the beam, and with that, her plans are thwarted. Jack breaks up with Millie at episode's end. 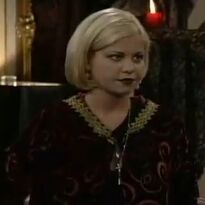 Add a photo to this gallery
Retrieved from "https://femalevillains.fandom.com/wiki/Millie_(Boy_Meets_World)?oldid=162547"
Community content is available under CC-BY-SA unless otherwise noted.