In actuality, the Witch is the disguise of Arlene Wilcox's evil twin sister (whose name isn't revealed), as she plotted to take over Wilcox estate, which Arlene inherited. Milissa Wilcox was an ancestor of Arlene and her sister, and she was notoriously burned at the stake and accused of witchcraft. Arlene's twin used the legend to disguise herself as Milissa's ghost and scare the people of Salem into believing that Arlene is possessed by the witch. She bribed town squire Gar Mooney into colluding with her in her evil scheme.

Despite the gang's original trap failing, the villainess ended up caught when she fell into an open grave. After getting a good look at the witch, Arlene was shocked to discover the villainess' resemblance to her, and it was revealed that she was her long lost twin sister. After the reveal, Arlene's evil twin and Gar Mooney were both taken to jail.

Nothing much is known about Arlene's twin. Judging on that Arlene had no recollection of having a twin, suggesting that the sisters were separated when they were very young. In the family tree their parents are listed as Warren Wilcox and Jane Putnam. 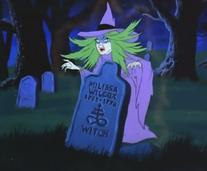 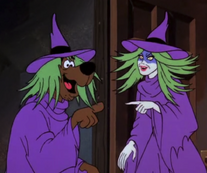 Add a photo to this gallery
Retrieved from "https://femalevillains.fandom.com/wiki/Milissa_Wilcox_(The_Scooby_Doo_Show)?oldid=135286"
Community content is available under CC-BY-SA unless otherwise noted.